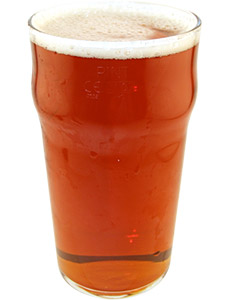 Twelve People I'd Like To Have A Pint With & Why
It's Thursday, and Thursday's for me used to (and ocassionally still does) mean Thursday night at my local for a few pints with the fellas. So hypothetically I'm gathering twelve living people who've influenced, provoked, inspired and interested me to go out and have a pint with.  Since it's hypothetical I figure I'll gather all twelve together and we'll see what happens, though I'd be equally interested in having a pint with each of these people individually as well.﻿ 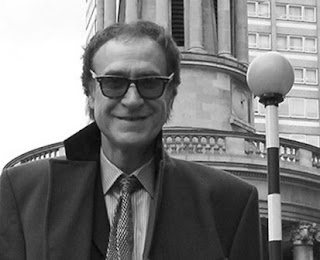 1. RAY DAVIES-
I'm not quite sure what meeting Ray these days would be like.  I met him for a few seconds back in the 80's when he was at my hair stylists having a pre-gig clean up.  He politely signed my Kinks PRT comp LP and made a sarcastic remark about the "cash in" attempt (it had a big mod bulls eye on the back and came with a 10" EP of Kink's "mod hits"), which is now, or possibly not, in possession of a young lady I was once smitten with.  I gather from reading interviews etc that once you get him going he has a lot to say but is also notoriously quick to end a conversation/interview, possibly not a good mix but worth the shot. 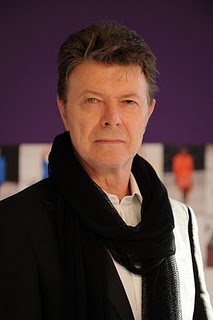 2. DAVID BOWIE-
I would probably run afoul of the Dame for spending too much time pestering him about his debut LP which is beyond a doubt one of my favorite albums of all time (the other being The S.F.'s 2nd LP) or his Pye singles but he always seems so animated and interesting in interviews and I'm quite sure he'd have me on edge talking about London 1963-1968 like he did on the VHS I've got of an entire VH-1 interview from the late 90's.  I missed meeting him by minutes in the late 90's when I walked onto French Roast on 6th Avenue in NYC for lunch with my 1966 singles box set in hand which I'd just purchased from Rockit Scientist.  Nearly all of the staff took delight in noticing the box set and remarking "Oh you've just missed him..." etc. 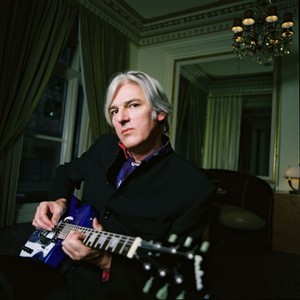 4. ROBYN HITCHCOCK-
Syd Barrett's no longer with us and even if he was I wouldn't subject what had been a very private man to this gang (but  I'm sure if he were there Bowie would be first in line to chat with him) so Robyn Hitchcock will do quite nicely in his place. He's a perfect eccentric, both musically and from what I've gathered about him and he's always managed to be consistantly inspired by things without ripping them off.  He's always struck me as a really interesting guy and would definitely be interesting to chat with. 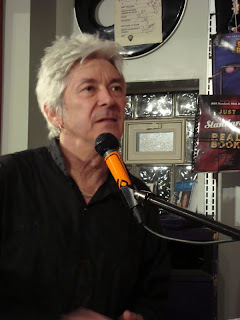 5. IAN McLAGAN-
I've had a pint with Mac so I can say in all truthfulness that he's an amazing guy to have a chat with over a beer and has one of the most positive outlooks I've ever seen in and on life. He's an encyclopedia of info on the the Sixties and both times I've chatted with him after gigs over a pint we've spent quite a bit of time discussing our fave B-3 jazz organists (and clothes!).  And he knows quite a few people on this list! 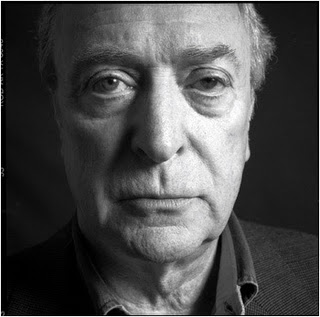 6. MICHAEL CAINE-
I'd never turn down the chance to have a pint with the man who played Jack Carter.  Sir Michael Caine has always come off both hysterical and serious to me in hearing him speak and reading his printed thoughts, though I doubt he's much of a pint man, I've always taken him for a martini or Campari and soda sort I wouldn't turn down the chance and I'm dead curious to see how he'd gel with Ray Davies because to me there isn't anyone else who exemplifies London more than these gents. 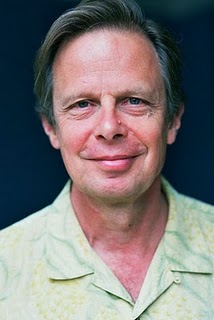 7. JOE BOYD-
Like David Bowie I'd probably babble incessantly and bury this poor man under a deluge of questions.  Why?  Because this is the man who offered Tomorrow, The Pink Floyd AND The Move to Elektra records whom he was in the U.K. scouting for, (all of which were turned down by Jac Holzman leading Joe to leg it), started the legendary U.F.O. club with John "Hoppy" Hopkins, produced the debut single by The Pink Floyd, discovered and signed Nick Drake and loads of other stuff that we have neither the time nor space to mention.  Needless to say the his guy exemplifies cool.  AND he grew up in Princeton, New Jersey which makes him a "local hero" to me!! 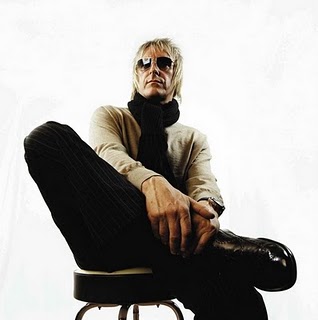 8. PAUL WELLER-
I know I've had a hit or miss musical relationship with the "Modfather" ever since I decided "Cafe Bleu" was not to my liking, but I've periodically enjoyed his stuff and I'll grant him this, he always gives a good interview because  like me he's 100% music crazy and perhaps unlike me he has a lot of interesting things to say.  To this day I still buy magazines with interviews with him because he's always an entertaining read.  And of course it's well known that he's no teetotaller and he's acquainted with Mac and Ray Davies and a few of our their respective guests so there'd be no lack of people to chat with for him...... 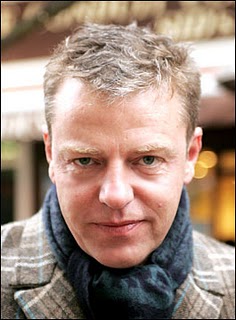 9. SUGGS-
Most of my ex-mod/skinhead pals are a Specials crazy, I used to be too but I'll have to say the Nutty Boys from Camden Town (that's Madness to those of you not in the know) have become my fave '79 ska band over the past decade because their music, though sometimes a tad commercial is such an interesting mash up of sounds.  Suggs always has some interesting stuff to say in interviews and I'd be happy to have a pint with anybody who could incorporate Kilburn & the High Roads, The Beatles, The Kinks, Max Miller and Prince Buster into their originals!  And besides him and Sir Michael Caine are from the same Manor, or so Sir Michael has written. 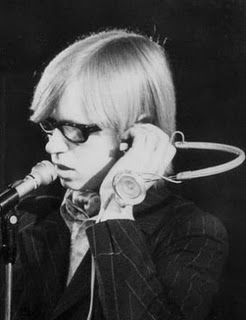 10. JEFF DEXTER-
Along with the late Guy Stevens Jeff Dexter was probably one of the coolest mod 60's DJ's going and like me Jeff made that flip from "mod" to "freakbeat/flower power".  His interviews are fascinating and he knew/knows EVERYBODY and yet when he mentions names you never once feel he's namedropping.  And of course I could ask him a million questions. He and Mac and Bowie go way back as well. 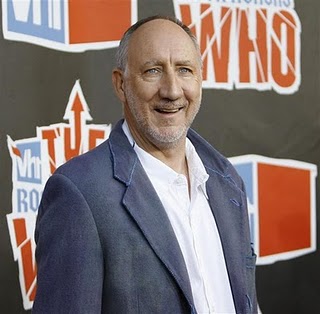 11. PETE TOWNSHEND-
I've read that Pete Townshend is almost deaf, who knows the sort of crap hacks come up with so maybe he wouldn't be a good choice in a large gang like this + beer if this is in fact true. Like Ray Davies he's always immaculately eloquent and incredibly articulate and much like Paul Weller he's never a boring interview subject. And of course he's well acquainted with Mac, Paul and Ray! 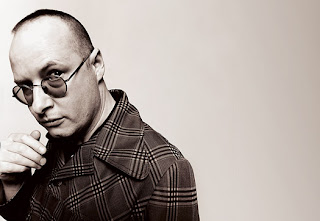 12. ANDY PARTRIDGE-
XTC were the first band I ever saw live and I've been a fan of their music for 30 years and am equally a fan of their psychedelic alter egos The Dukes Of Stratosphear.  That said Andy's a big 60's psychedelia buff and very into toy soldiers (something that occupied a better part of my childhood and fell by the wayside once I discovered girls and mod, in that order) which I think would make for some amusing conversation and I'd be keen to see him and Ray Davies interact because I think XTC's "Black Sea" and "English Settlement" are the "Face To Face" and "Village Green Preservation Society" of their day.
By Wilthomer - January 13, 2011

Great post and some varied guests to have a drink with. I'm always tongue-tied when I meet anyone famous, so I'll just be a complete knob.

Back in the late 90s I visited London with my woman for a weekend break in the big City. It started to drizzle (not uncommon in London) and we hurried along the streets of Piccadilly Circus for some shelter.

I found an entrance to a Cinema and stood there for 10 minutes until the rain stopped. It wasn't too long before a certain Suggs joined me to beat the rain.

Moments later a hot babe jumped out of a taxi and greeted Suggs with a knowing smile and off they went into the Cinema. I never said a word, not even a "Hello" even though I wanted to.

There was a GREAT Ray Davies bio-documentary on TV over the Christmas period. If you've got some time I recommend you watch it on You Tube. Here's a link for part 1 (all other parts are accessible from the same uploader)

What a great idea and nice list too. Rod Stewart, Steve Jones, Johnny Rotten and Captain Sensible would have to be on mine..

Interesting list of people, starting w/Ray Davies & I would like to add two more: 1. Martin Newell of the Cleaners From Venus, whose classic solo album The Greatest Living Englishman was produced by Andy Partridge & 2. Nick Lowe, whose interviews always have something that leaves me laughing.

Thank you all for your comments!

Great idea for a post! I wish I would of thought of it myself. ;)

Please allow me to add a couple.

#13 : Although he died in 2004, I'm certain that legendary DJ John Peel would of been a very interesting guy to have a drink with. Ever since I saw the movie John Peel's Record Box, he has peeked my curiosity.

#14 : Brian Wilson. Not sure how the conversation would go but it would surely be a thing to remember.

John Peel, great choice. Well it's never too late to blog your own list!I started doing a monthly music Top 10 because of this excellent blog:

And writing more about clothes after discovering yours!

I was lucky enough to actually meet & chat with John Peel in a pub on more than one occasion. My first job in the Summer of 79 was in a building next door to Sounds, and he used to submit his copy then go to the pub round the corner.

This was fairly common knowledge, so young hopefuls used to hang around waiting for him. I was barely 17, didn't fully realise how lucky I was. But one thing's for certain, he didn't talk down to us.

A year passed and I was in another job, near Oxford Street. I'd somehow stumbled into an offer to write for an American collector's mag. Walking near Broadcasting House, I bumped into Peelie, who remembered me. Filled him in on my news, and he gave me the names, numbers and message that led to my interviewing Kenny Picket & Eddie Phillips.

Hard to quantify what a gem of a man we lost.