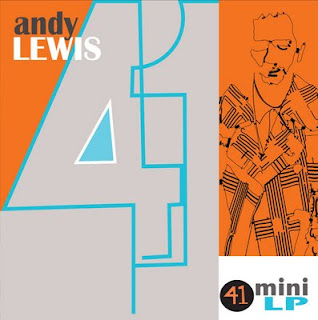 These days when folks mention Andy Lewis they usually feel compelled to mention the club night he used to do, what band he used to DJ for or what mega star he plays bass for.  Well I'm not having any of that because from the two great long players AND this solid new mini LP I figure the man has more than earned his keep on his musical merits not to necessaitite any name dropping or "star connecting".  Overall its a brilliant mix of vintage keyboards of all sorts, contemporary beats and slightly lysergic feel at times with nods here and there to eras gone by without attempting to note for note sound like it's 1967 or 1971.

"41", the title track is a slightly contemporary sounding groovy little instrumental. It reminds me of the "Life On Mars" theme  in concept only: a groovy sci-fi type instro with smatterings of cool keyboards (vintage Mellotron, 70's TV theme synths, chimes etc ) and a cool Gerry Anderson show sounding space port announcement "this is 41" on the intro.  "Complexity" is a nice bouncy number with the intensity of  a classic Makin' Time 45 with shades of the long lost 90's fave The Dylans. "Sky Bar" hits a "Black Is Black" sort of groove with some nifty bongo type beats going on in the background and some trippy background vocals that again has me recalling The Dylans and their one good (debut) album. "Yarbles" is a Mellotron/Melodicia instrumental  thats what happens when  "2,000 Light Years From Home" and "Grooving With Mr. Bloe" have a drunken one night stand. "Centre Of Attention" is sort of Blur somewhere between their first three CD's before it all went, horribly, wrong. The vocals have a distinct Damon Albarn meets John Squire feel and the lyrics are pure 90's scenster/hipster (though these days I'm not sure what the latter is) put-down.
"Mr. Camera" is my fave track of the LP. Its a rapid fire socio topical Ray Davies style observation that never lets up.  Upon a first listen I thought the witty rejoinder chorus was "Mr. Cameron don't like it...", but alas with my car windows down I heard it wrong (it was an 80 degree Easter sunday so the windows were down and the sunroof was open). Someday people will look back and hear this track and suss that was 2011 encapsulated (or one would hope).  Above all the lyrics are great: "don't wanna be a pilot in the Royal Air Force and drop bombs on the Taliban.....but I quite like sitting by the river and watching the boats go by" and "but I quite like spending my money on secondhand clothes and LP's". Amen! "Last Song Of the Year" is a lazy, downtrodden kitschy closer, another of my fave tracks of the bunch.  Musically the key changes reminds me of something I would've heard on my transistor radio in the early 70's when my mother banished me to the backyard to "play outside".

Oh wow, drawn in by the fantastic cover (I just love those graphics)and enthused by your review I checked out some stuff by him and really like what I hear. So, thanks for this, I had no idea!