It's all too beautiful: my introduction to the Immediate era Small faces 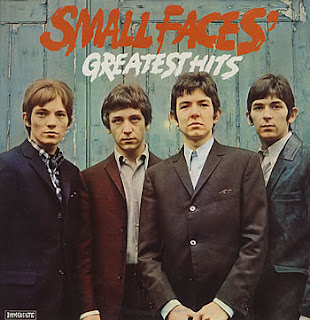 Today I was driving back to work from lunch on a balmy Friday afternoon here in Lower Binfield with the windows down and the moon roof open and The Small Face's "Itchycoo Park" on the automobile hi-fi and I was immediately transported back to a sweaty summer afternoon in 1982 where a teenage Mr. Anorak Thing was sitting in his tiny bedroom in his parent's house that had formerly been an attic to the previous owners listening to his recently purchased, previously unheard Immediate records compilation "The Small Faces Greatest Hits" (it was my second purchase of their material, my first, a Decca era domestic compilation LP called "By Appointment" came whilst purchasing tickets to see THe Jam along with the first English Beat album a few months earlier).  "Itchycoo Park" had already figured prominently in anything I had ever read about the band and I was about the hear it for the very first time.  At first I was sort of taken aback by the laid back hippy lyrics at the time, but I assured myself that anyone who had center parted hair or wore a green suede coat or button down collared shirts was surely no hippy. I had a lot to learn and sometimes even hippies are beautiful people, like the late great author of this track, Ronnie Lane.  And so began the first of many such "acceptances" to the "mod rule" that later enabled me to enjoy un-mod bands like The Pink Floyd , The Herd and so forth, and still does to this very day. Be well, be young, be happy and above all, be good to each other.


Ian McLagan gives a bit of background on "Itchycoo Park":

This post is right up my alley and I totally agree on opening up to the hippie stuff! The first band to break-through for me, really, was Vanilla Fudge believe it or not.

But the Small Faces made the path to those sounds so much more pleasant. My first CD (gulp!) by them was the From the Beginning one, and I fell in love with those clothes!

I was just reading a MOJO 60s special last night which had an article about Itchykoo Park which had comments by Ian McLagan which were rather interesting.

I also had a copy of that comp. My first introduction to the Small Faces was the Archtypes LP that came out on MGM Records w/the little kids on the cover that my library had. It's amazing how many comps were available for a band that only had one hit over here.

What a great reminiscence and such good taste, too.