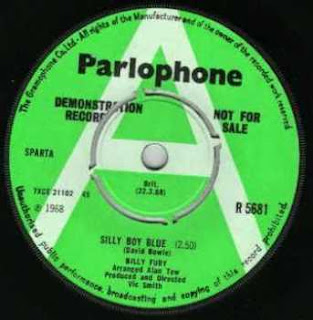 BILLY FURY-Silly Boy Blue/One Minute Woman U.K. Parlophone R 5681 1968
Despite the fact that he was still an unknown David Bowie had chalked up a few releases of his compositions by other artists, in no small part due to the persistance of his manager Kenneth Pitt. Among them were Kenny Miller ("Take My Tip" Stateside SS 405, April 1965), Oscar ("Over The Wall We Go" Reaction 591012 January 1967), Ronnie Hilton ("The Laughing Gnome" HMV Pop 1600 July 1967) and Pitt's other act, The Beatsalkers doing what would be the first of three Bowie tracks ("Silver Tree Top School For Boys" CBS 3105 December 1967). Despite all of these releases by 1968 David Bowie was in limbo. He'd been dropped by Deram after just three singles and a debut LP (see Anorak Thing June 1, 2009 entry), none of which charted and attempts at being signed by another label were grim (even being turned down by Peter Asher at Apple records). Nonetheless Pitt continued to plug away at both getting a new recording contract and pushing Bowie's material for other artists to cover.  He managed to convince Billy Fury's manager Larry Parne's that Bowie had something to offer his client. By 1968 Billy Fury's hit days were long gone. Despite a switch from Decca to Parlophone in January 1967 he hadn't scored a hit on EMI's label. Game for a chance at anything Parnes agreed to record a version of "Silly Boy Blue", a track that had already graced Bowie's debut album, as Fury's next single.  Sadly it did nothing for either the artist or the composer.
Billy Fury's version of "Silly Boy Blue" follows the original closely, opting to utilize the Buddhist slant lyrics of Bowie's LP version and all their Tibetan imagery of yak butter statues and reincarnation (the lyrics on Bowie's original demo cut with The Lower Third at R.G. Jones studios in Morden, Surrey in 1965 concern running away and growing old and pre-date his brief flirtation with Buddhism that led to the lyrical re-write). The production is over the top, not in an excessive way but in a full on manner with horns, strings and lush production/arranging (arranging care of Alan Tew and production and musical direction care of future Jam producer Vic Smith).  Fury's vocal delivery is far punchier than Bowie's which makes the number more interesting in my book and the fade out is downright chilling.  The flip is pretty much a note for note cover of The Bee Gee's original, though lacking the spark that propels the A-side. 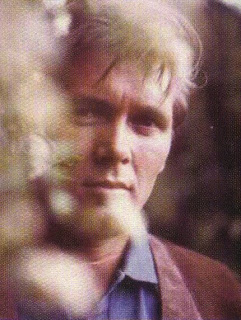 Billy Fury 1967
Both sides have just been reissued on the brand new Billy Fury CD compilation "The Complete Parlophone Singles". 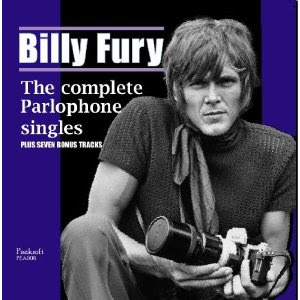