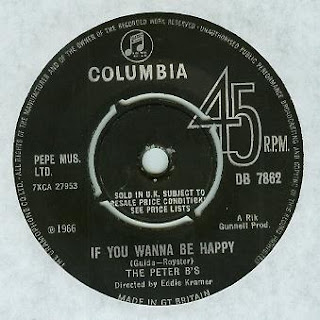 This here kids is the vinyl debut of the legendary John Mayall's Bluesbreakers/Fleetwood Mac guitar hero Peter Green. The Peter B's (also known as Peter B's Looners) were an instrumental quartet featuring Peter Green -guitar, Dave Ambrose (later to join The Brian Auger Trinity)-bass, Peter Bardens (ex-of The Cheyenes and Them)-keyboards and Mick Fleetwood (ex-Bo Street Runners and The Cheyenes)-drums.  The band were managed by the famous Gunnell brothers (along with other more famous London r&b acts like Georgie Fame and The Blue Flames, Zoot Money & The Big Roll Band, Chris Farlowe and the Thunderbirds and John Mayall and The Bluesbreakers).  Falling under the Gunnell's umbrella meant that the band got a great deal of exposure playing with their other acts, backing or opening for many visiting American soul/r&b acts, playing as last minute substitute for the other acts and playing the host of clubs run by the Gunnell's (The Flamingo, The Ram Jam etc).  Despite this exposure the band never really became anything more than a springboard for some very famous names and eventually mutated into The Shotgun Express a vehicle for the vocal talents of Rod Stewart and Liverpudlian Beryl Marsden (see Anorak Thing February 11, 2009 entry).  They secured a few BBC sessions (which have yet to see the light of day save one track, see below) where the band showed off their affinity for jazz/r&b where they played Big John Patton and Booker T and the M.G.'s covers.  Among the tracks they performed in their last B.B.C. session (February 2, 1966 on "Jazz Beat") was a Caribbean flavored interpretation of Jimmy Soul's 1963 hit "If You Wanna Be Happy".  This became their one and only single which was released in March 1966.

As indicated above "If You Wanna Be Happy" has a light Caribbean inspiration, not really a ska vein but more of a cod Calypso thing built around Barden's organ with a kitschy ascending/descending organ scales solo that reminds me of a late era Tornado's record (see Anorak Thing February 10, 2010 entry for comparison) with some mock patois chat.  It's catchy and kitschy.  The flip "Jordell Blues" is a straight out bluesy number built around Barden's jazzy piano and some bursts of guitar pyrotechnics from Green. 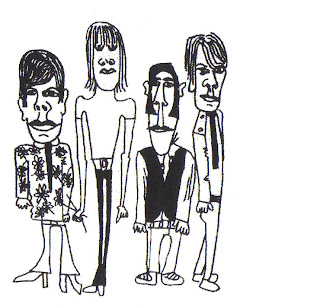 Surprisingly neither side, has to my knowledge, been reissued anywhere before. This is rather surprising given the host of star players featured in the band and the fact that they recorded for EMI's Columbia output one would suspect it would not be that difficult to license/re-issue the tracks?

Addendum:
"If You Wanna Be Happy" was reissued on the now out of print double CD retrospective "Write My Name in the Dust: the Peter Bardens Anthology 1963-2002".

Hear "If You Wanna Be Happy":

AND a groovy snatch from their February 2 1966 live BBC session doing "Outrage":