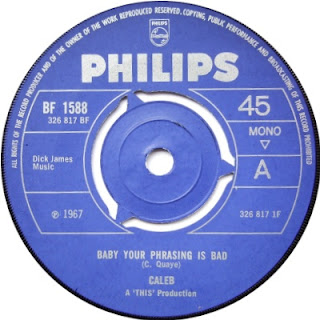 CALEB-Baby Your Phrasing Is Bad/Woman Of Distinction U.K. Phillips BF 1588 1967

Okay folks we're onto something(s) here. First off this is the second time in our blog history where we've written about a record that I've never owned or even seen a copy of (the first was discussed here). Second, and like that post it's one of the most insanely expensive AND insanely brilliant British psychedelic records of the 60's, and of all time for that matter..........

Without turning this into a Wikipedia entry, Caleb Quaye was a session musician for Dick James Music (he later, through this connection would wind up playing guitar for Elton John, among others) and producer (The Loot, Apple etc). When I first heard "Baby Your Phrasing Is Bad" back in 1985 on my friend Rudie's copy of "The 49 Minute Technicolour Dream" my mind was blown.  At our pal Mick from Mod Fun's urging we both went out and snagged the two "Rubble" volumes he recommended at Vintage Vinyl in Fords, NJ.  I bought "The Psychedelic Snarl" which featured it's flip side , "Woman Of Distinction".  And like the lead off track from "The 49 Minute.." said "strange things are happening".  It was as if my uptight mod consciousness about psychedelia was blown to bits upon hearing that track.  There was no turning back, I was now, very nearly a fully fledged psychedelic mod.  There are lots of "defining moments" in "modernism" for me and this was one I will always remember.  Up till then nearly ever band I liked, save The Pink Floyd, could be justifiably connected to "mod" in some way.  There was no way of that happening with either side of this record!  What also amazes me was that a few years back I discovered Caleb Quaye was not some back combed bouffant wearing British white boy he was actually a light skinned black gentleman, proving, once again, there are indeed many colors in our psychedelic rainbow!!

"Baby Your Phrasing Is Bad" uses the same groovy phasing effect that The Small Faces utilized on the drums on "Itchycoo Park", but the WHOLE song is run through a "phaser".  It's sonic trippery throughout the entire number, like one big oscillating mindblower.  The lyrics are sort of trippy too and I'm not sure if they're about a cat who can't understand his gal because her phrasing is bad or because he's so far out there he can't figure out what she's saying. "Woman Of Distinction" applies the same effect but the song is not as "out there" as the A-side. It's a medium paced number that almost reminds me of The Apple (whom Caleb produced actually!), just as good as the A-side though certainly not as mind numbingly lysergic! 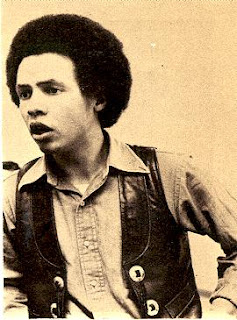 Hear "Baby Your Phrasing Is Bad":