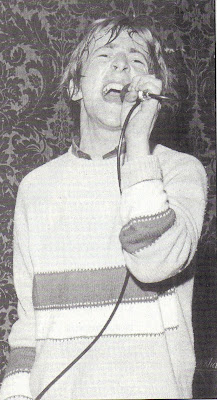 Words are flitting around the Internet that Reggie King, the lead singer of one of my fave 60's bands The Action, has passed away. After lots of back and forths between my peeps and I on FaceBook Pete Watson's daughter Luann was kind enough to pop me a line telling me that it was confirmed by her dad that Reg had indeed passsed away from cancer and would be buried tomorrow.  I wrote this dozen's of times today on FaceBook and I will write it for the final time: it would've been awful if this had been a rumor but even more so if it were to be true.  Two of my fellow Action fans/scribes over in the U.K. have fittingly paid their tributes which I strongly suggest you read:

I'm not really sure what to write.  I'm not one of those guys who gets all philosophical on his blog or on FaceBook when So and So from "Happy Days" or the guy who played harmonica on "Grooving At The Mud Hole" dies. I reserve these moments for people who really affected me in some way instead of being just some pop culture has-been foot note. The Action, along with The Small Faces and Georgie Fame are, however my favorite 60's band.  From their Motown covers to their half baked (double entendre) "lost Sessions" CD/LP "Brain/Rolled Gold" and even Reg's 1971 untitled solo LP (and it's even more brilliant outtakes mini LP "Lost In Action") Reg's voice set the band apart from others.  It didn't matter if he was crooning soul covers, aping the West Coast harmony sound of the Association , getting heady with tracks like "Brain" or back to the blue eyed soul stuff with "You Go And Have Yourself A Good Time" on his solo LP Reg knew how to deliver the goods in his own style. Unlike many of his peers and contemporaries Reg didn't try to sound like anybody else, he sounded like Reg.

I think with his passing it's best to let the man himself sum it up with a song that perfectly suits when someone else has moved on with "You Go And Have Yourself A Good Time":

This is absolutely horrible news, Bill.