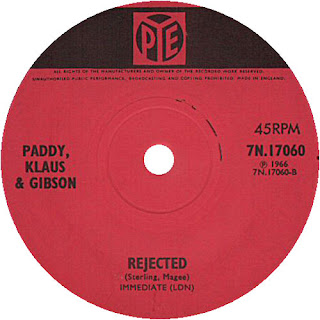 Cream were NOT the first Sixties "supergroup power trio".  That moniker goes to Paddy, Klaus & Gibson.  Liverpudlians Paddy Chambers(lead vocals/guitar) and Gibson Kemp (drums) had been in a multitude of Liverpool beat groups between them like The Big Three, Faron's Flamingos, Rory Storme and The Hurricanes, Kingsize Taylor and The Dominos and The Eyes(not to be confused with the mod/freakbeat icons of the same name).  Klaus Voorman (bass) of course was one of the Hamburg "exi's" who were old pals with The Beatles.  The band were managed by Tony Stratton-Smith (who also managed The Koobas and The Creation) who secured them a deal with Pye records, though eventually he was bought out by Brian Epstein. The band cut three singles before breaking up in late 1966.  Paddy went on to join the final line up of The Escorts (see Anorak Thing May 3, 2010 entry), Klaus did the cover of The Fab Four's "Revolver" and The Bee Gee's 1st LP and replaced Jack Bruce in Manfred Mann.  I can't claim to know where that left Gibson Kemp?! 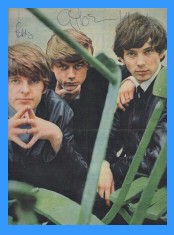 This was their second Pye single which was released in February 1966. "No Good Without You Baby" is a tepid, lifeless, soulless version of the Marvin Gaye number which had already been masterfully covered by The Birds in October 1965 as the A-side of Decca F 12257.  The flipside, "Rejected" (not to be confused with the amazing single by The Fenmen of the same name) is a different kettle of fish.  It's a catchy, rhythmic little number with some laid back Georgie Fame-ish style vocals, stride piano, a jazzy beat and is imminently danceable.  The lyrics are pretty amusing, concerning a guy who takes two jobs to please a materialistic woman who leaves him for another man because he's never home. 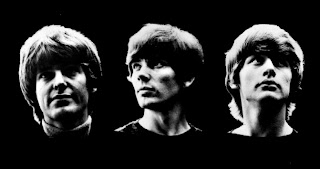 "No Good Without You Baby" was reissued on Sequel's CD compilation "Doin' The Mod 2: Jump And Dance" while "Rejected" appeared on their "Doin The Mod 1: The Go Go Train" CD.
Hear "Rejected":
﻿
http://www.youtube.com/watch?v=XeIEYt1VEz4
By Wilthomer - October 27, 2010