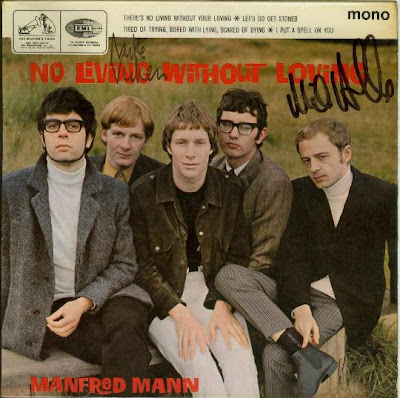 MANFRED MANN-There's No Living Without Your Loving/Let's Go Get Stoned/Tired Of Trying, Bored with Lying, Scared Of Dying/I Put A Spell On You U.K. E.P. HMV 7EG 8922 1965

This was the last E.P. released by what I call the "classic" Manfred's line up before guitarist Mike Hugg split.

"There's No Living Without Your Loving" is one of those ballad's lead singer Paul Jones was so fond of.  Not really an awful track but by no means a great one either.  The band's cover of the Ashford/Simpson composition "Let's Go Get Stoned" is brilliant.  It's soulful, it's jazzy (with some neat little B-3 licks by Manfred) and it swings and by the time it's over you want to "stop by the wine shop on your way home and say let's go get stoned".  The crown jewel of the E.P. for me is "Tired Of Trying, Bored With Lying, Scared Of Dying". It's a brilliant social commentary from the pen of Paul Jones addressing xenophobia, teenagers, racism etc:

"You cry about the teenagers for breaking your rules, it don't occur to you you never built enough schools.."

"the fascists horrify you it's a sin and a shame, discrimination, immigration what's in a name.."

The number is delivered with some rocking piano tinkling and very distorted guitar licks with usual top notch vocals from Paul Jones. I've always been suspect of versions of Screaming Jay Hawkins "I Put A Spell On You", but this version is an exception. It's actually probably one of the better versions I've heard with some very soulful vocals from Paul Jones and a moody/jazzy feel throughout the whole number care of some subtle organ, enthusiastic backing vocals from the rest of the boys and a kick ass sax solo! 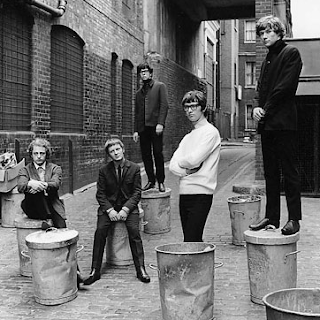 All of the tracks on this E.P. can be found on the essential Manfred Mann CD compilation. "Down The Road Apiece: Their EMI Recordings 1963-1966".