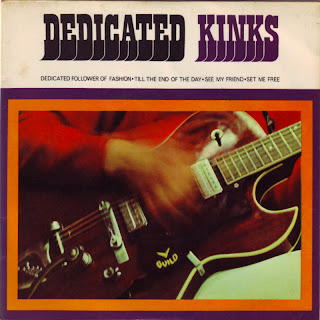 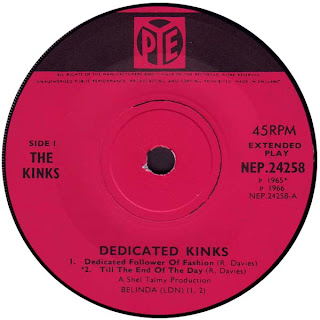 
I very recently noticed that amongst all my fave U.K. 60's groups I've blogged about (Who, Small Faces, Action, Move, Zombies, Georgie Fame, Manfreds etc) there's one I've left out: THE KINKS!
For shame!  Well there's not much I can say about them that hasn't already been written so I've scoured my old archives for scans of something interesting and came across this U.K. E.P. which came out in the Summer of 1966 (in the midst of a crisis plaguing the band as Ray Davies was going, temporarily off the rails).  All four tracks were all previously issued as Kinks A-sides but what makes it interesting is that it's far less common than other U.K. Kink's E.P.'s like "Kinksize Hits" or "Kinksize Session" and perhaps as scarce as the more in demand "Kwet Kinks" (featuring the U.K.'s first airing of their U.S. "hit" "A Well Respected Man"). 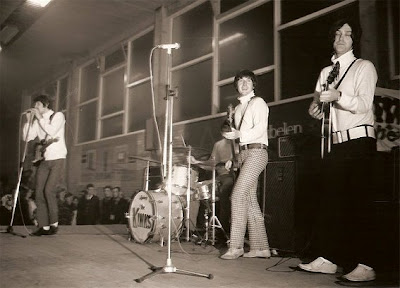 Cool pic of the lads in action on the Continent, 1966
I'm not going to bother to blag on about where you can find these tracks as 60's Kinks songs have been licensed everyplace. I've got these tracks on the CD versions (with bonus cuts) of the "Kinda Kinks" and "Kontroversy" LP's.
By Wilthomer - October 20, 2010

Thanks for this post, especially the gincy picture of the Kinks in action, which I've never seen before. I've been a Kinks fan for over 30 yrs. now. However, I've no interest in buying the coming Ray Davies "duets" album, which includes Springsteen, Bon Jovi & Metallica warbling along w/Ray. The originals are the best.