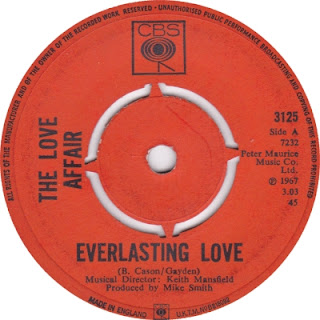 THE LOVE AFFAIR-Everlasting Love/Gone Are The Songs Of Yesterday U.K. CBS 7232 1967

It matters not that this record was entirely session musicians being fronted by the band's cocky/youthful (17 at the time of it's release) lead singer Steve Ellis, because in my estimation, with records that are this bombastic it matters little who did what.  "Everlasting Love" was originally cut in the States by Robert Knight, though his original is far more subdued, lacking the fast pace of this version it's not bad, this, is better. Again in my estimation, this version blows the original to smithereens, from the thundering drums, the full effect of the brass and the throbby bass it's a non stop white soul stormer.  In fact it was undoubtedly the prototype for the upbeat Carl Carlton hit version many years later.
.
For The Love Affair, though a band in name only at this point, this was their second single and it hit the ground running in time for Xmas of 1967 and topped the U.K. charts in January 1968.  They had previously cut a single for Decca (a decent version of The Stones "She Smiled Sweetly" backed by the amazingly soulful "Satisfaction Guaranteed"  U.K. Decca F 12558 in February 1967).  Sessions for the debut Decca 45 also yielded a Small Faces's styled raved up version of the Spencer Davis Group's "Back Into My Life Again" and a mod/soul groover titled "Sweetness And Tenderness", both sadly, until recently remained unissued!  The flip, "Gone Are The Songs Of Yesterday" is typical A&R man B-side crap that would've cropped up on any U.K. 60's band records by groups who didn't write their own material (see Dave Dee etc, The Foundations, The Fortunes etc).

Hear the "studio" version and "Gone Are The Songs Of Yesterday" (ick):