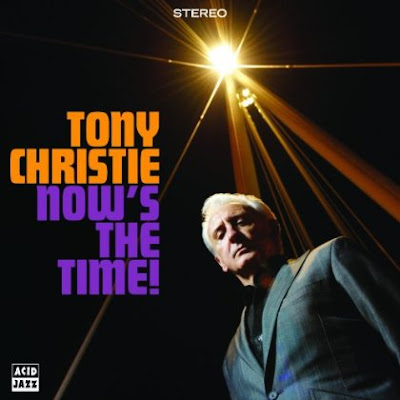 The name Tony Christie will mean nothing to you if you're an American, if you're British then you're in the know.  I'm not sure how best to describe ol' Tone for you if you're a Statesider so let's just say he's sort of like Tom Jones if Tom Jones had never made any kick ass beat records in the mid 60's. One of my best friends is from Huddersfield, Yorkshire and he shudders at the very mention of his 1973 semi hit "Avenues and Alleyways" (the theme for a TV show called "The Protectors" across the pond), always much to my delight.  Christie's biggest U.K. hit was called "What I Did For Maria" (#2, yawn). His other hit, at #18 was called "Show Me The Way To Amarillo", which some of you Yanks might know from a YouTube video made by a bunch of British soldiers stationed in Iraq who did a hysterical bit of pantomime to it from their basecamp.

Anyway now that we're done with the history lesson Tony has cut some tunes for Acid Jazz, which I've only just discovered despite it being over half a year ago.  Much in the spirit of Tom Jones (who recorded an uptempo mildly contemporary reworking of Don Fardon's "I'm Alive" (using Fardon's version as a template to good affect and an incredibly soulful  bonus only Amazon.Com download called "Feels Like Music"), Christie "got with it".  Like these efforts by Jones the recordings have a fairly modern production value to them but the people playing on them are clearly well aware that they are recording something clearly inspired by something 4 and a half decades ago.  I'm not quite sure what this E.P. is because I downloaded it from iTunes.  It's not on the Acid Jazz website listings as a CD E.P. or a 45 and Amazon.co.uk confusingly describes it as "number of discs 5" (what?)!

For £4.90.  I'm assuming it is perhaps...ah whatever.  "Now's The Time" is the title of his latest LP/CD (also on Acid Jazz).  It's an uptempo number lead by some heavy brass, a bit slick and "modern" but there's a funky bit of guitar/bass and drums in the back of it all that's virtually indistinguishable from the multitude of stuff of this nature that Daptone is cranking out here in the States.  Christie's vocals are quite good (he's 68), not a full on soul man like fellow senior citizen Dean Parrish but no supper club crooner either.  The impetus behind my buying this was his over the top version of Donovan's "Season Of The Witch" that I'd read about over at:

"Season Of the Witch" is campy, funky, fast, hard and doesn't mess around. It's got some nifty flute, strong horns and footloose and fancy free groove.  Heavy stuff here indeed and I, surprisingly dig it.  "Beautiful Woman", dead boring.