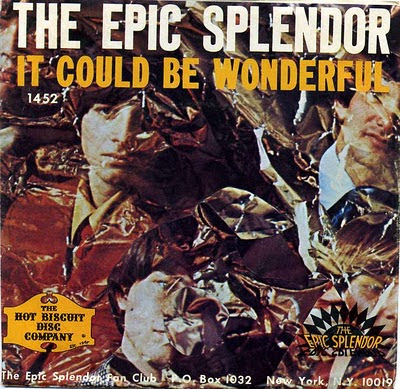 THE EPIC SPLENDOR-It Could Be Wonderful/She's High On Life U.S. The Hot Biscuit Company 1452 1967

Way back when I found multiple copies of this 45 at the Princeton Record Exchange and bought them (they were $1 each) as I figured anyone who covered a track by the British band The Smoke (of "My Friend Jack" fame) were worth a listen for a buck, and the sleeve looked pretty cool too!  I've no idea who The Epic Splendor were, you can pop on over to one of my fave blogs to read more:

Granted "It Could Be Wonderful" is nowhere near as amazing as The Smoke's original version, but they get an A+ for effort.  The Epic Splendor speed it up a bit, in the process losing the soulful bassline of the original.  After a few listens it's not bad at all, the vocals are a bit weak and the flute is annoying but the rest of the arrangement is pretty rocking! I'd love to know how they got ahold of it as it wasn't released here in the States (in fact I don't know if any Smoke 45's ever came out in the States, though I do know 'My Friend Jack" turned up on Capitol in Canada). "She's High On Life" is better.  It reminds me alot of an album track by The Association with it's minor chords and happy sunshine pop feel, plus some groovy vocals and baroque sounding orchestration, very cool, very cool indeed!

Hear "It Could Be Wonderful" and "She's High On Life":

Email ThisBlogThis!Share to TwitterShare to FacebookShare to Pinterest
Labels: The Epic Splendor

Their best record (and closest thing they ever had to resembling a hit) was "Little Rain Must Fall". You can hear it here. http://www.youtube.com/watch?v=Nx4OLr3bVw4

If you're curious about the Hot Biscuit Disc Company, the label, here's a Billboard story about it founding: