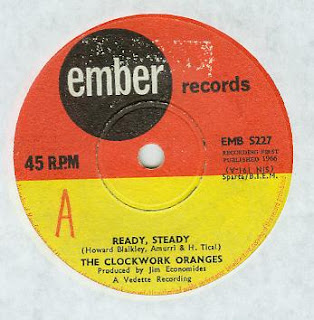 With a name like "Ready, Steady" by a lad-ish sounding group like the Clockwork Oranges you'd expect this record to be as mod as "I Can't Explain" by the Who or well, "Jump and Dance " by Carnaby (see http://anorakthing.blogspot.com/2009/10/carnabetian-army-marches-on.html).  Well you're half right.  But would you expect it to sound like Britain's attempt at the Beach Boys?!  Here you have it kids, the world's only surf-mod record!!  It has that frenzied feel of an early Dave Dee, Dozy, Beaky, Mick & Tich record (possibly due to it being co-authored by Howard Blaikley, who along with Allen Howard wrote every Dave Dee track, more on that in a sec) with some great shouted vocals punctuated by some backing vocals and phrasing in the melody of The Beach Boy's "I Get Around". It's amazing no one in the Beach Boys camp ever sued, probably proof of how few people actually heard the record!  But it's a solid disc, from the lead vocals, the backing vocals and the musical backing.  The flip, "After Tonight" is a dead boring ballad, like a fourth rate Four Seasons. It was previously cut by Dave Dee etc on their first album. I know abosolutely nothing of who The Clockwork Oranges were, where they came from or what became of them so if you're aware let us know. I've heard that Terry Clarke (formerly of The Herd, he sang on their first two singles before being replaced in 1966 by Peter Frampton after the band's third single) was their lead singer but this has yet to be verified.  A German picture sleeve shows them as a five piece. They were produced by newly arrived American producer Jim Economides.

Both sides were collected on the CD compilation "Ember Beat Volume 3 (1966-67): After Tonight". 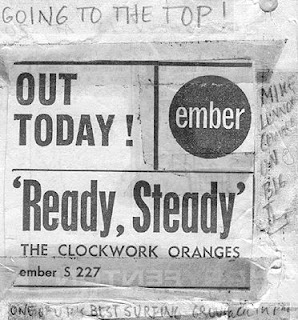 TRIVIA NOTE:
The record got a release at the home of surf music in the U.S. on Liberty Records as F-55887 and a release in Germany (Columbia 23.226) came with a picture sleeve!