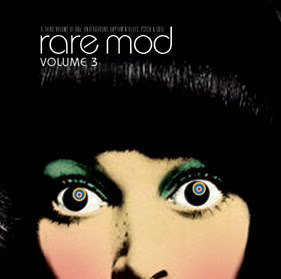 Acid Jazz has been releasing quite a few 60's related items as of late (check this space for more), none better than the third installment of their all 60's/all U.K. "Rare Mod" compilation series that contains exclusively unreleased tunes.  I've decided to give you a quick track by track rundown:


1. The Montanas - Open The Door
I've got to say despite digging most of The Montanas 60's sides this one didn't really grab me.  It's a bit heavy, organ driven and reminds me of one of those late 60's tracks that crops up on "Le Beat Bespoke" that aren't always my scene.
2. Sean Buckley & The Breadcrumbs - No Matter How You Slice It
Heroes from the ancient "Searching In The Wilderness" LP comp thanks to their  "Everybody Knows" comes Sean Buckley and The Breadcrumbs.  Their offering here isn't as frantic but still great.  It's got a sort of '66 mod/soul discotheque feel with soulful vocals, cool breaks, organ and enthusiastic backing vocals.  Yeah!
3. Andee Silver-Baby I Need Your Loving
Some lame assed U.K. Motown covers stayed unreleased for a reason.  Nuff said.
4. Dave & The Diamonds - Think About Love
Slash and burn freakbeat stuff here driving with distorted guitar, punky/snotty vocals and a great tempo.


5. The Creation - Life is Just Beginning (Alternate Take)
With trepidation I whined "oh I've heard this before", but I didn't.  There's an extra verse an followed by a cool little orchestral bit that none of us has heard before.  A new trick for an old dead dog.

7. Derry Wilkie & The Pressmen - Can You Think Of Another
Led by one of the handful of black singers working the Liverpool scene, the late Derry Wilkie, the music is pretty decent in this track but the vocals are a bit flat but I seem to recall an unnamed Liverpudlian beat musician referring to Wilkie as "the most soul-less black man I've ever heard".  Nuff said.

8. Goldie & The Gingerbreads-Look For Me Baby
New York transplants led by Goldie Zelkowitz/Genya Ravan pull out all the stops with a punchy version of The Kink's tune with some groovy organ.  I once heard that Georgie Fame played organ on some of their stuff but that's yet to be substantiated.  One of the best of the bunch here!

9. John’s Children - Desdemona (Alternate Take)
As above with the Creation track you're expecting something you've heard but again you're wrong.  This one features an entirely different lead vocal track (Andy Ellison sounds bored and unenthusiastic), wiggy organ going on in the background (reminiscent of the noodlings on "Indian Thing" by The Shotgun Express) and the "offending" lines 'lift up your skirt and speak/fly" replaced by a tamer "Why do you have to lie/speak".


10. The St. Louis Union - About My Girl
Our Mancunian mod/r&b heroes The St. Louis Union appear here with a nifty unreleased gem full of some B-3 worthy of a Brian Auger or Dave Davani record and some bluesy belting from the late/great Tony Cassidy. The liner notes state it was recorded in the home of some cat in Huddersfield!

12. The Nocturnes - Sunflower
The Nocturnes were sort of a poor man's Episode Six (if that's possible), running the gamut of U.S. West Coast pop harmonies (best exemplified by their version of Jimmy Webb's "Carpet Man") but as this contribution and a track on the previous volume show, they had some groovy mod/soul up their sleeve with this number driven by some way out guitar and slight Hammond, like The Mamas and the Papas jamming with The Artwoods!

13. The Montanas - Dr Nero
Another heavy unreleased Montanas cut, dating, like the previous track, from 1970. This one is a bit more likable as it's frantic and has a cool bit that resembles to classical melody that The move used at the end of "Disturbance" but still has that feel that most records made by once "cool" Sixties artists who grow their hair and try to get "with it" after it was way, way too late.

14. The Preachers - Get Back To The One
The moddy jazz of the Bill Wyman produced, Peter Frampton sung Preachers only got one U.K. 45 but luckily there are more swinging sax accented killer tracks like this one lurking in the archives!

15. Sean Buckley & The Breadcrumbs - Shatterproof
Another Sean Buckley cut firmly in the Mod" camp, rocking but owes more than a bit to The Trogg's 1st single's B-side "The Yella In Me".  Dig the nifty bass!!

16. Dave & The Diamonds - Such Is Life
This one reminds me of a cross of Dave Davies fronting The Sorrows circa '65,  cool stomping beat with wiggy guitar and plenty of "la la la's" to compliment the campy lead vocals.

18. Unknown - Pink, Purple & Blue
An unknown group offering a great little beat/harmony number about a discotheque dollybird who parties too hard every night.  It's a very decent social commentary about the underside of Swingin' London by a band we'll never know.

19. Gary Brooker - Verse One
In between his stint with South Coast r&b connoisseurs The Paramounts and Procol Harum organist Gary Brooker cut a few unreleased cuts.  This one is somewhere between Booker T and Whistling Jack Smith!  Odd but amusing!

20. Wainwright’s Gentlemen - Ain’t That Just Like Me
A fairly pedestrian version of a number bettered by the Tony Jackson era Searchers, not terrible but rather pointless!!