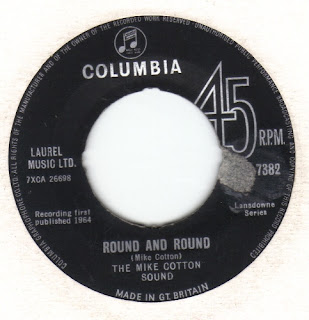 THE MIKE COTTON SOUND-Round And Round/Beau Dudley U.K. Columbia DB 7382 1964
This is the second 45 by the "reborn" Mike Cotton after he ditched that dead boring trad jazz, grandad and moved into jazzier r&b as played by Messers Money, Bond and Fame.  Though never as popular as any of the acts they still made some very cool singles and an untitled LP that ranks as one of the most collectible British albums of the 60's.

"Round And Round" is a brilliant moody little piece with hushed vocals, tasty combo organ (c/o future Animal Dave Rowberry) and a brilliant trumpet solo from Mr. Cotton at a tempo much like The Sorrow's "Take A Heart".  "Beau Dudley" is a rollicking version of "Bo Diddley" with all stops pulled out to create that "there's a wild party in the recording studio" sound with some wiggy sax/harmonica dueling and frantic ivory tinkling.  A bit boring after awhile but well played. The Mike Cotton Sound were: Mike Cotton (trumpet, harmonica and lead vocals), John Beecham (trombone), Johnny Crocker (clarinet, tenor/alto sax), Stu Morrison (bass), Tony Pitt (guitar), Dave Rowberry (keyboards) and Jimmy Garforth (drums). 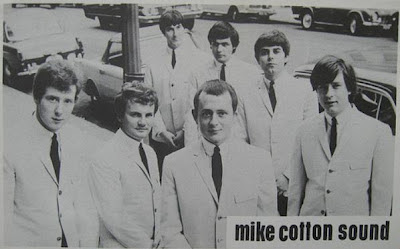 "Round And Round" appeared a few years back on the CD compilation "Breaking Point: 20 Hard Edged Beat Diamonds". Both sides of this 45 appeared as bonus tracks on the bootleg CD reissue of their rare as hens teeth untitled LP on the Rocking Beat label, who though on the never never always turn out a great sounding product!

Hear "Round And Round":