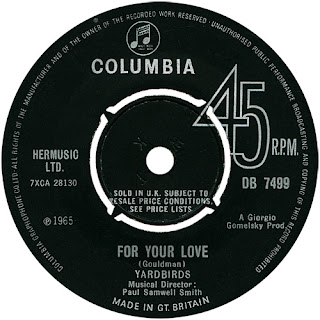 Ever hear the one about the famous British "blues" guitarist who got pissed off that his r&b band decided to record a Graham Gouldman "pop" song that charted so he jacked it in and quit?

"For Your Love" was the third Yardbirds single, and the final one to feature Eric "Slowhand" Clapton who quit because being a blues purist  he did not want to play pop songs, fair enough.  And again to be fair there's not much guitar on it, just the rocking bit in the middle, the rest is propelled by Relf's bongos and Brian Auger's harpsichord (that's right, I heard it from the man himself, he was booked for the session and showed yp and asked where was the organ or piano and for the first time in his life played a harpsichord, true story, heart crossed).  I think it stands as one of their best efforts, especially the soulful main chorus where everyone gets a chance to sing, rousing stuff. Gouldman's own combo The Mockingbirds cut a version of it but it was never issued, leaving The Yardbirds to have a first go at it!  "Got To Hurry" is a bluesy instrumental with key charges reminiscent of "Green Onions", fairly pedestrian but it gives Clapton a chance to show off before he took off.

Of course you can find both of these cuts pretty much anywhere because Giorgio Gomelsky (their first manager) pretty much licenced the crap out of their stuff, leading to a plethora of sub-par official and very un-official Clapton era Yardbirds products on an exploitation level only equalled by The Small Faces under similar circumstances!
﻿
﻿
﻿ ﻿ ﻿

Email ThisBlogThis!Share to TwitterShare to FacebookShare to Pinterest
Labels: The Yardbirds Eric Clapton

I think it's ironic that Old Slowhand quit over "For Your Love", especially considering some of his later songs such as "Wonderful Tonight", real blusey song that one was, right?

I do prefer the Yardbirds over Led Zep any old day. Their legacy was probably obscured by all those crappy compilations.

I've never seen a pic of eric with that hair, my goodness! It may be super popular but For Your Love is still one of my faves!