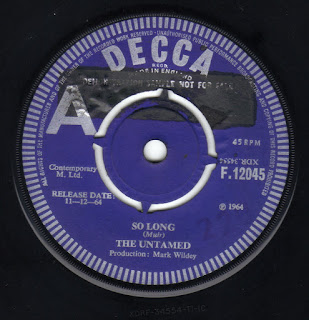 
What really will always perplex me is how both sides of this record have gone unreissued, hell they aren't even on RPM's now out of print Untamed CD compilation "Gimme Gimme: The Singles And Unissued Rarities"!! I'm assuming it's because it was not produced by Shel Talmy who owns the rights to all of the material on the mentioned CD, it was their only Decca single, their next would be on Parlophone, then onto Stateside for one more then Talmy's Planet for their final two!

The Untamed were an r&b combo from the Brighton area led by Lindsay Muir  that released 5 amazing singles in just two short years. Their records varied in style but were always firmly in the r&b vein.  "So Long" is akin to any early Animals 45 , mid tempo with combo organ and an energetic groove, "Just Wait" follows the same mould with a tad more jazzy feel than the "A" side.  Strangely as previously mentioned, this was not produced by Shel Talmy, who produced their next four singles. Talmy took Muir under his wing and stayed with him throughout all the band's constant line-up and label changes.

As mentioned above neither track has been reissued!

Email ThisBlogThis!Share to TwitterShare to FacebookShare to Pinterest
Labels: The Untamed Lindsay Muir