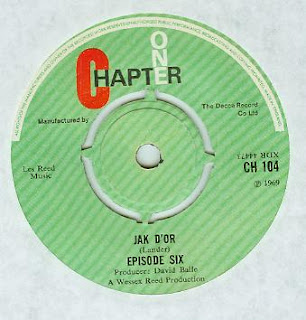 Rather than give you the whole run down on the Episode six let's suffice to say they were a five piece U.K. pop group who specialized in sunshiney harmony pop with the odd foray into weirdness.  By 1969 they lead singer Ian Gillian bolted to Deep Purple(on the condition that the Purp's fire bassist Nicky Simper so he could bring his bass buddy from the Six, Roger Glover along with him).  With both of them gone the band soldiered on for one last 45, today's article, that did not require much pop precision harmony.

"Mozart Versus The Rest" is pretty boring, they were already beaten to the punch on the "rock plays heavy guitar/speed versions of classical pieces " by Jeff Beck's stab at "Bolero" and Dave Edmunds and Love Sculpture's "Sabre Dance", its a dull pointless exercise in how fast a band can play and how clever they can be to incorporate classic music into rock n'roll, like the late George Harrison quipped on "The Simpsons" once: "it's been done".  However the flip is where things get good and groovy. "Jack D'or" is a spooky instrumental with some heavy drums and bass backbeat, blistering guitar and eerie "ooos and aa's" backing vocals worthy of a Satanic ritual scene in a late 60's Hammer film and a voice slowly saying "Jack D'or" every now and then. 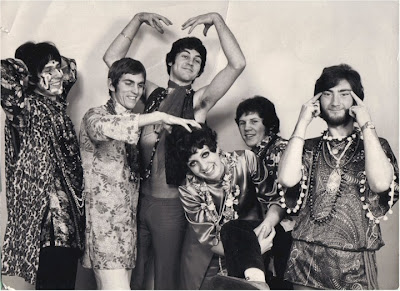 Hear "Mozart Versus the Rest":

Thanks for sharing, haven't really heard anything but Love Hate Revenge & Time and Motion Man (which I love!)- can certainly hear Gillan & the beginnings of Deep Purple hear.

There's some great footage on them on the German TV show "Beat Beat Beat" live in '67 doing a cracking version of "Morning Dew", I'll dig it up and post it!