More Who Covers: From Sweden The Mascots 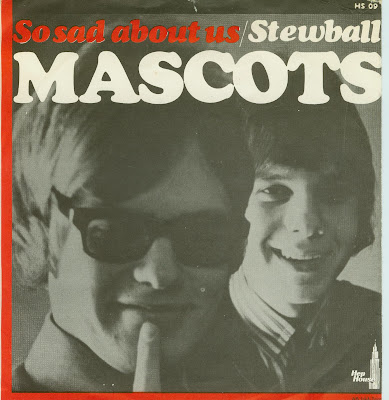 The Mascots were a Swedish 60's group who cut two LP's and a whole load of great singles during their four years of existence (1964-1968).  Next to The Tages they're one of my fave Swedish 60's groups and like the Tages they embraced a few styles along the way.  Starting out as another British beat group influenced band they moved on to embrace a slightly harder more rocking "mod" influence (which is where today's subject leads us).

The Who were monstrously huge in Scandinavia (Sweden in particular) and in '65-'66 had made numerous pilgrimages there, so it's no surprise that any Swedish bands covered their material.  The Mascot's version of the Who's "A Quick One" album track "So Sad About Us" is not nearly as jangly or punchy as the original but it's still good as it trades the Who's melodic/ Rickenbacker feel to a plodding/harder edged delivery.  The band change the lyrics during the bridge a bit for some reason, but considering they're singing in a second language from their mother tongue I find it pretty impressive regardless (and amusing, they sing "all the kids are jumping around and everybody's there...", or so it would seem, instead of "but you can't switch off my loving like you can't switch off the sun").  The B-side, "Stewball" an old folk-blues standard was probably learned through The Hollies (who were possibly even bigger than The Who in Sweden) version on their "Would You Believe" LP (who learned it from Peter Paul and Mary's interpretation!).  I was never fond of the track and the Mascots don't do it much justice, but no one really can!

Both cuts are available on the RPM double CD reissue of their second LP "Ellpee".

Email ThisBlogThis!Share to TwitterShare to FacebookShare to Pinterest
Labels: The Mascots