The Face of '68 Says Goodbye To The Herd

The Herd are best known as the home of one Peter Frampton (after stints with The Preachers and Moon's Train aka The Train).  They actually cut three 45's in the U.K. prior to Frampton's joining.  Upon becoming their lead singer they cut 4 singles on Fontana in the U.K. (all hitting the U.K. Top 20).﻿ This would be their 5th for Fontana and their last with Frampton who left in early 1969 to join Steve Marriott in Humble Pie. 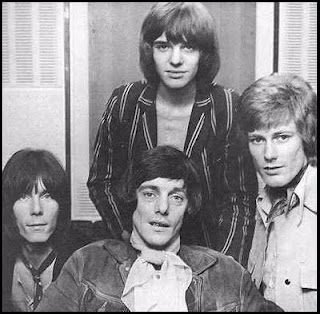 The music press at the time claimed that this record was to be produced by Steve Marriott and Ronnie Lane, but they are, as you can see, not credited on the label. In fact it was produced by Frampton and keyboardist Andy Bown. I'll have to say it sounds rather muddy compared to the earlier opus works on Fontana (produced by Steve Rowland) and obviously Bown and Frampton were still finding their feet in the knob twiddling department.

"Sunshine Cottage" is an interesting track as it couples both Frampton's lead vocals with the baritone of bassist Gary Taylor on the chorus (also along for the ride was actor Victor Spinetti's brother Henry on drums who had recently replaced Andrew Steele).  Taylor's Righteous Brother's styled vocals were often utilized for single lines in various Herd numbers, sometimes to good effect, though on this number it sounds a bit corny.  What carries the number is the groove set by Frampton's distorted guitar and the catchy chorus.  Sadly it fizzled in the chart's no doubt aiding Frampton's decision to jump ship.  The flip side "Miss Jones" is a cheeky misogynistic number about a secretary from the point of view of a lecherous boss, very dated but somewhat rocking lead vocals, I know what Andy Bown and Gary Taylor's voice sounds like and this isn't it, wonder who it could be?  Whoever it is it's the same vocalist who sang on the post Frampton 45 "The Game" and a few unreleased post- Frampton era cuts that have cropped up (ie "Follow The Leader"). Anyone got any idea?

Both sides are available on a variety of Herd CD's, the best and most recent (and more to the point, still in print!) is "Paradise Lost: The Complete Fontana Years".

Email ThisBlogThis!Share to TwitterShare to FacebookShare to Pinterest
Labels: The Herd Peter Frampton

Yes, good band and quite original I would say. I've featured The Herd three times over the years on my site including the 45 you're reviewing today.

I've got the Spanish release in picture cover.