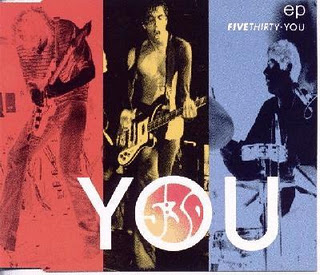 1. 5:30-"You"
A blast from this past.  This one time mod band reinvented themselves on the heels of The Stone Roses and issued the excellent "Bed" CD in 1991 with quite a few powerful tracks, like this one and 20 years later it still sounds quite powerful in it's wall of wah-wah guitar oblivion!

2. ALICE COOPER-"Beautiful Flyaway"
My pal Ray Fracalossy turned me onto this track (and "Shoe Salesman") on a much treasured mix tape he made me while I was away during Desert Shield/Storm from their "Easy Action" LP.  "Beautiful Flyaway" is a brilliant, melodically intricate piano driven piece of pop perfection, not what you'd expect from these heavies!

3. THE TELEVISION PERSONALITIES-"Three Wishes"
I'd known of these guys from "I Know Where Syd Barrett Lives" 45 but it wasn't until some dark times in 1986 that a S.F. pen pal turned me onto their "They Could Have Been Bigger Than The Beatles" LP which she kindly sent me a copy of (bless you Carrie White wherever you are!). This tune was and still is the best on the album.  Disjointed, bleak and chillingly atmospheric.

4. THE WILD ANGELS-"Please Don't Touch"
This rocking U.K. 45 version of the Johnny Kidd classic on the B&C label (home of some early Atomic Rooster singles) actually dates from '69 and sounds more like '65, killer!

5. THE AUTUMN LEAVES-"Why Must You Feel So Bad"
One of the crappy things about owning WAY too much music is you unintentionally overlook stuff so with ye olde iPod on "shuffle" this gem came across and I'd forgotten how freaking cool this LP/CD by this Twin Cities group  ("Treats And Treasures") is, in fact it stands as my fave long player on the 90's!

7. REGGIE KING-"So Full Of Love"
Why is it that the best Reg King solo tunes didn't make it on the LP? This one was left on the cutting room floor and fittingly issued on the "Missing In Action" E.P. It easily could slide for "Brain" era Action material with it's tabla, raga licks, near Eastern style vocal melodies and groovy harmonies.

8.  SLADE-"How Does It Feel"
This is one of my fave Slade tracks.  I think it's down to the grandiose bombastic delivery (flutes, horns, strings) which make it all sound very full and not unlike some brilliant tracks on "Quadrophenia"  like "5:15" or "Dr. Jimmy".

10. THE KINKS-"Autumn Almanac"
Hands down the best song ever written about my favorite, but rapidly short in these times of global warning, season.  I can't feel the rustle of leaves beneath my feet or the cool morning fall air without this Kinks klassick popping into my brain! 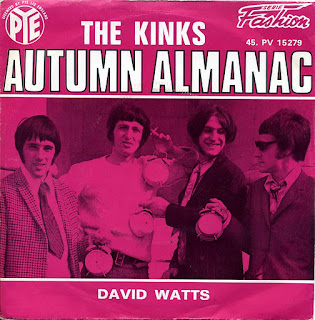 Bill, you somehow both confirm & surprise w/your lists. "Autumn Almanac" is a great tune, but I was surprised to see something by both Alice Cooper & Slade. Have you ever seen the movie Slade in Flame?

I have indeed Joe, in fact watching it a few years back got me into this track!

The cover of Autumn Almanac!!! Never seen it before.

The sleeve of "Autumn Almanac" is a French 45 pressing.

Great picks Bill. You're right about that Reg track. Hopefully not too long to wait now until the rest of that stuff gets released (been listening to the final mix today). It will blow your balls off!