The Equals, you can't go wrong with the original 60's Equals.  Their mix of rock n roll soul/r&b and ska/reggae rhythms was ahead of it's time as was the fact that they were probably the first multi racial rock n' roll band to grace the U.K. Top 20.  They were even bigger on the Continent where today's copy comes from (Germany to be precise). Hailing from North London they were: Derv Gordon(lead vocals), Lincoln Gordon (rhythm guitar), Eddie Grant (lead guitar), Pat Lloyd (bass) and John Hall (drums).

"Baby Come Back" was the band's second single, hitting the streets in early 1967 in the U.K., initially it did not chart but instantly made #1 in places like Germany, Belgium and the Netherlands (to name a few). Upon a re-release in the U.K. in 1968 it became their only British #1 becoming certified as a gold disc. It became they only U.S. Top 40 entry reaching #32. 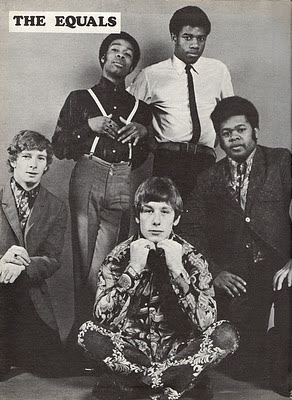 For those who haven't heard it "Baby Come Back" it is characterized by Eddie Grant's infectious funky guitar lick that sounds straight off of an early Wailers session (perhaps it was the intention?) and Derv's distinctly West Indian accented lead vocals and rousing chanting backing vocals from the rest of the band. "Hold Me Closer" utilized the same guitar effect but was faster and punchier (thanks to the locomotive engine beat laid down by John Hall).  It contains some well placed horns that punctuate the number at the right moment too.

Sadly as discussed in previous posts there sadly seems to be a lack of legit original recordings Equals CD's in print at the moment!

Email ThisBlogThis!Share to TwitterShare to FacebookShare to Pinterest
Labels: The Equals

I'm pretty sure there's bass on the recordings, but they always seem to have 3 guitars in all the clips...

I'm pretty sure there's bass on the recordings, but in all the clips I've seen, even the live ones, they play three guitars.

That's been a constant source of debate amongst my peers and I ever since the early 90's when we first saw the "Beat Beat Beat" live clips!

There's no bass on the recordings.