The Dame On Deram

It's well known that one record that haunts Mr. David Bowie: this campy April 1967 single by him which was reissued at the height of the Ziggy era (1973) and much to the surprise and chagrin of all concerned, charted reaching a respectable #6! In 1990 when Bowie's audience were able to "phone in" votes for their favorite Bowie tracks to be performed N.M.E. attempted to encourage readers to vote for "The Laughing Gnome" so that Bowie would add it to the repertoire. Their effort failed.

It's really not as awful as everyone slags it off to be, certainly it's the least favorite of all of the 60's Bowie tracks pre-"Space Oddity" tracks in my book but hey whatever.  The inane sped up chipmunk voices (gnomes in this case) are a bit much and the lines are pretty corny: "Why don't you get your hair cut you look like a Rolling Gnome" "Yeh I went to the London School of Eco-gnomics"..... but the instrumental backing is amusing (woodwinds and tinkling piano and some nice murky bass, a formula utilized on his debut LP two months later).  The B-side is where it's at in my books.  I'd long sworn Bowie sang "Waste of f*ckin' time , take a look at my life and you'll see, have a quick butcher's" at the tracks fadeout, but a commenter at this excellent Bowie blog:

has convinced me it's "waste of flippin' time,.."!  Sigh, and here I thought Bowie had snuck in an "f" bomb in '67.  The number is a brilliant study in cynicism as Bowie singles out names of people who've disappointed him or slighted him (edging on bordeom where he quips "Your mind, blow it, blow it!") while his backing band of Derek “Chow” Boyes (keyboards), Derek “Dek” Fearnly (bass), John “Ego” Eager (drums) provide backing amongst some renaissance fair styled baroque woodwinds.  And how many other records do you know of came with a bassoon solo? Just this one. 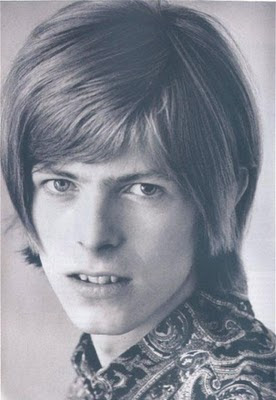 David would release one more 45 on Deram (DM 135), a re-recorded version of an album track called "Love You Till Tuesday" in July of 1967 before his contract expired and he moved on to perms, art labs and songs about wayward spacemen.  Both tracks are on any multitude of Deram era Bowie comps, we strongly recommend hearing it on the deluxe 2 CD edition of David's first LP where you can hear both mono and stereo mixes of both tracks.

Trivia Note:
"The Laughing Gnome" was recorded and released by personality Ronnie Hilton in the U.K. in July of 1967 as HMV POP 1600 where Hilton delivered it spoken word in a semi thick Yorkshire accent.

Collector's Note:
As with all original 60's U.K. Bowie Deram releases the matrix numbers on the original issues are upside down.  The 70's reissues bear the same serial numbers but have the matrix number right side up.

Hear "Gospel According To Tony Day":