Revenge Of The Cybermen Explained! 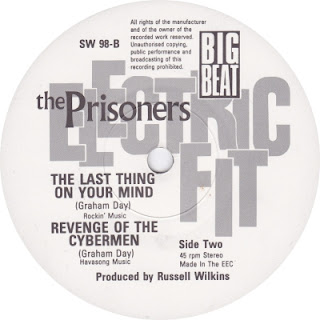 It's long been a topic of conversation since back in the day that The Prisoners had nicked "Revenge Of The Cybermen" from the music being played in the dance hall scene in the famous "Get Carter" film.  I'd long thought the number in "Get Carter" sounded a lot like Willie Mitchell's "30-60-90".  Recently I stumbled upon a video upload on YouTube of the scene with information clearing it all up.  It would seem the song in "Get Carter" is indeed "30-60-90" but instead of the Willie Mitchell original (which it's clearly not) it's performed by a group called the Jack Hawkins Showband from a live LP they recorded called "Everything Is Beautiful" from a gig at the Blackpool Larcano.

Graham Day of The Prisoners obviously has a sense of humor about it all as this clip of him and his band The Goalers proves as they cover "30-60-90" at a gig in Dublin where he cheekily introduces it as "a number I thought I wrote a long time ago"!

And here's Willie Mitchell's original version that started it all:

And here's The Prisoners "Revenge Of The Cybermen":

Email ThisBlogThis!Share to TwitterShare to FacebookShare to Pinterest
Labels: The Prisoners Get Carter Willie Mitchell

Well, I never knew any of that. Very interesting.

Thanks SO much for this, been trying to find the Get Carter version of 30 60 90 for YEARS, nice one!

Thanks for this I’ve been trying to find this track
It’s taken 30 years .
As carter chases Thorpey into club the band name is listed on bill poster if you look quickly

My pleasure Darren, next time I watch "Get Carter" I will keep an eye out for that poster!