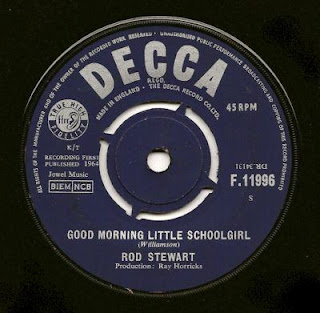 ROD STEWART-Good Morning Little Schoolgirl/I'm Gonna Move To The Outskirts Of Town U.K. Decca F 11996 1964
After cutting his teeth singing with the likes of Long John Baldry and the Hoochie Coochie Men and appearing as a guest vocalist (uncredited) on their June 1964 British United Artists 45 (UP-1056) covering Sister Rosetta Tharpe's "Up Above My Head" Rod Stewart was prepared to make his own mark.
Signed to Decca records in the wake of numerous post Rolling Stones r&b boom signings his debut hit the streets in October 1964 (he even got a chance to plug it on "Ready Steady Go" as photos attest!).  The A-side was a slightly more uptempo version of the Sonny Boy Williamson standard "Good Morning Little Schoolgirl".  It moves along nicely thanks to some nimble acoustic guitar finger picking and a bluesy bar room piano.  The one to hear for me is the flipside, Big Bill Broonzy's (no doubt via Ray Charles's reading) "I'm Gonna Move To The Outskirts Of Town".  The musical backing is pure juke joint stuff, not bad for a bunch of white , probably middle aged session men.  It's Rod's vocals that put this one up there and out there, he plays it cool and sings the blues like nobody's business. 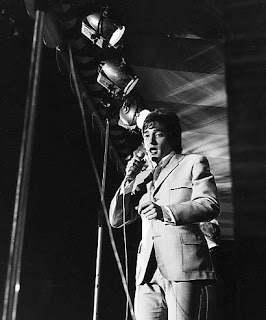 Rod giving it some onstage at the Richmond
Jazz & Blues Festival 1964
After this single Rod moved to Columbia for two other singles, more on the first some other time and the second can be found in our October 7, 2008 entry.
"Good Morning Little Schoolgirl" appears on Decca's excellent CD comp "The R&b Scene" while "I'm Gona Move To The Outskirts Of Town" surfaced on their "The Blues Scene" CD.
Hear "Good Morning Little Schoolgirl":

I have that episode of Shindig In London that has Rod the Mod perform @ the Richmond Jazz Festival w/Steampacket. It was probably the first time he ever appeared on US TV. It also has the Animals doing a burning live version of "We Got to Get Out of This Place" w/Eric Burdon looking exactly like the '78 version of Elvis Costello.