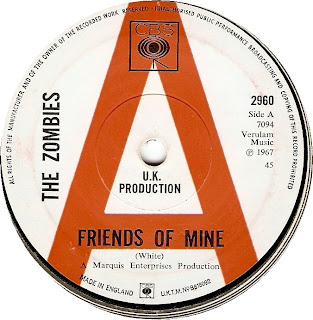 For nearly half a year The Zombies were in a nail biting limbo. Their gigs were drying up, their fees dropping and their ventures into the U.K. hit parade were long gone. March of 1967 saw their final Decca single (a cover of Little Anthony & the Imperials "Going Out Of My Head" b/w "She Does Everything For Me" Decca F 12584). The band eventually secured a new contract with CBS and set about recording new material that would eventually compose their (posthumous) second British LP "Oddysey (sic) And Oracle". 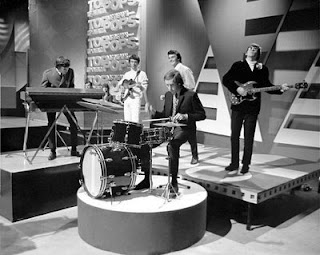 On "T.O.T.P" '66
"Friends Of Mine" sparks the "new" Zombies sound of CBS (Date in the U.S.) with both upbeat optimism and a more decidedly poppy sound that ushers in their use of choral perfection.  Name checking friends, lovers and cohorts in the chorus "Friends Of Mine" epitomises the Zombie's "Sound of '67".  The flip, "Beechwood Park" is a somber number that's akin to The Moody Blue's B-side of the same year "Cities".  Again it relies on the band's vocal prowess and has a laid back jazzy approach (first exhibited in their cover of "Summertime" way back in '64). 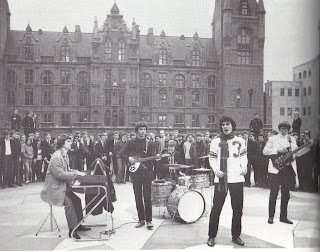 Both numbers, as indicated earlier, can be found on their excellent "Oddysey And Oracle" which has been re-released in several servings.

Hear "Friends Of Mine":