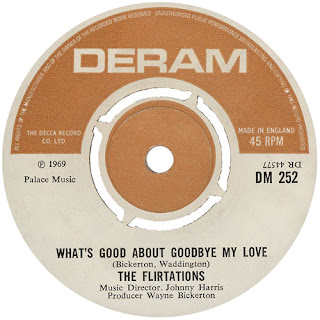 THE FLIRTATIONS-What's Good About Goodbye My Love/Once I Had A Love U.K. Deram DM 252 1969
This was the third U.K. Deram single by the U.K. based South Carolina female soul trio squired by Liverpudlians Wayne Bickerton and Tony Waddington.  It was released in April 1969 and followed their previous release, Deram DM 216, the monster hit "Nothing But A Heartache".

"What's Good About Goodbye My Love" bears all the trademarks of The Flirtations best Deram sides.  It has over the top production and a razor sharp wall of sound laid down by the best session musicians money could buy featuring an array of strings, brass, etc.  "What's Good..." is uptempo, far more manic than their previous two U.K. Deram A-sides.  On the flip we have "Once I Had A Love" which follows the same tempo of their previous A-sides and once again it's amazing.  While typing this I've come to the realization that nearly all of their tracks up to this point (exception being their previous B-side, "Christmas Time Is Here Again") are about loss of love making them a rather apt at being the merchants of heartbreak anthems!  Albeit entertaining ones. 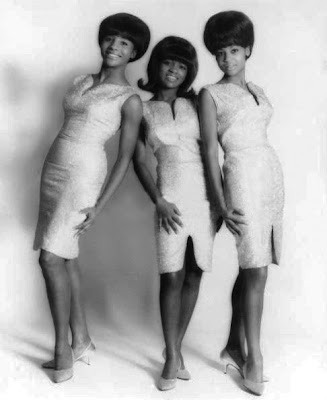 Like all good Flirtation's Deram sides these tracks are both contained on the CD release of their sole LP , 1970's "Sounds Like...".

"What's Good About Goodbye My Love" on German TV's "Beat Club" 1969 . Though there only seems to be two of them in this clip!

Email ThisBlogThis!Share to TwitterShare to FacebookShare to Pinterest
Labels: The Flirtations Deram soul