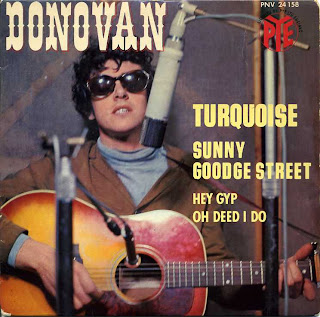 DONOVAN-E.P. Turquoise/Sunny Goodge Street/Hey Gyp/Deed I Do France Pye International PNV 24 158 1966
After nearly two years of being what he called "the Scottish Woody Guthrie" Donovan was poised to follow his TRUE role model Bob Dylan and go "electric".  Before he did so his acoustic denim cap wearing period underwent a bit of a change where other instruments besides his acoustic guitar and gob iron accompanied his singing. This brief metamorphosis heralded his electric debut where he strapped on a Rickenbacker 360, incorporated a sitar and went "electric".
"Turquoise" is a mellow affair, a bit of the "old" Donovan in it's instrumentation.  I like it but what drives me positively batty is the high pitched harmonica that's way too high in the mix and hits so notes that are a bit too high for human ears in spots, still it's chording is magnificent.  It was previously a U.K. single ( Piccadilly 7N19584 in October '65). Next. "Sunny Goodge Street" is one of my favorite Donno tracks.  In the classic vein of people watching/observation songs it's one of the best in the genre that begs a reprinting of it's lyrics for full effect:
"On the firefly platform on sunny goodge street
Violent hash-smoker shook a chocolate machine
involved in an eating scene
Smashing into neon streets in their stillness
Smearing their eyes on the crazy colored goddess
Listenin' to sounds of Mingus mellow fantastic
"My, my", they sigh
"My, my", they sigh
In doll house rooms with coloured lights swingin'
Strange music boxes sadly tinklin'
Drink in the sun shining all around you
"My, my", they sigh
"My, my", they sigh, mm mm
"My, my", they sigh
"My, my", they sigh
The magician, he sparkles in satin and velvet
You gaze at his splendour with eyes you've not used yet
I tell you his name is love, love, love
"My, my", they sigh
"My, my", they sigh
"My, my" - sigh"

With references to hash and Mingus we know firmly where Donovan's head was and if this number isn't mod jazz I don't know what is (Donovan, among many other boasts, says he was a bit of a mod in his book. Fair cop as he did write some trippy liner notes for the Moody Blue's r&b/soul soaked debut LP "Magnificent Moodies" and was an avid early Who follower). The number opens a new era to Donovan's musical tapestry: jazz. With swatches of flute, cello, stand up bass, horns, electric guitar and drums the whole thing is a groovy pastiche of what I'd imagine London '66 on the verge of psychedelia was like. It's like something you'd associate with black and white moments clouded by Woodbine's and brown ale before it was all liberated by lysergically fueled technicolor . The highlights for me are the mellow horns (later used to similar effect on David Bowie's "London Boys") , the brief Wes Montgomery inspired licks and the snappy flute solo. "Hey Gyp" (previously issued as the U.K. flip to "Turquoise") it still musically the old acoustic Gibson/harmonica backing, but it's delivered with more urgency (amphetamine?) and lyrically makes mention of L.S.D. and not the "pound, shillings, pence" kind with bits like "I'll buy you a sugarcube..." followed by "I don't want to go for no trip". The number was covered to great effect first by the U.K. mod duo The Truth's (Deram DM 105) positively frantic reading in November '66, (Eric Burdon &) The Animals on their "Animalisms" LP in December '66 and then by Animal Hilton Valentine's ex-Wildcats band mate Keith Shields (Decca F 12572) in February '67. "Deed I Do" is, I'm told, a Bert Jansch cover. Donovan covered a lot of his material. Jansch never impressed me, covers of his material even less. 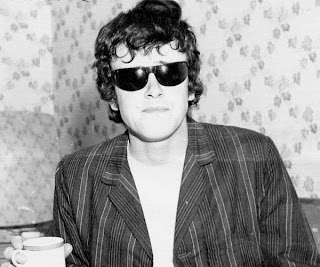 Photo courtesy of
http://www.donovan.ie/en/
Due to management/ contractual disputes, the U.K. would have to wait to hear Donovan go "electric" till December 1966's "Sunshine Superman" (Pye 7N 17241) which was pipped by both U.S. and Euro releases.

All four tracks have popped up on a variety of Pye era Donovan compilations which are never in short supply anywhere in the world thanks to their less than expensive licensing fees.

Email ThisBlogThis!Share to TwitterShare to FacebookShare to Pinterest
Labels: Donovan