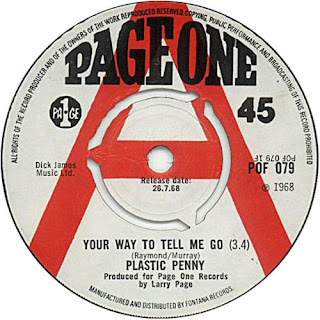 PLASTIC PENNY-Your Way To Tell Me Go/Baby You're Not To Blame U.K. Page One POF 079 1968
This my friends is one of those rare instances in British 60's 45 rpm territory where both sides of a single are equally amazing. This was the second 45 by the Larry Page managed and produced act Plastic Penny. Their debut, the sappy "Everything I Am" was a sizable hit. This one, not so, but isn't that the way it went back then? 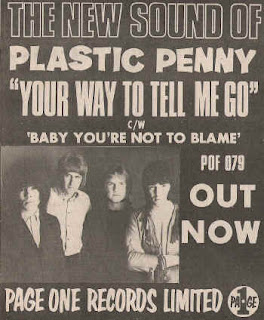 "Your Way To Tell Me Go" starts out with all the right ingredients: murky bass, Hammond and some tasty licks and some very high register lead vocals.  The whole mood is a bit "heavy" on the musical side calling to mind the late '68 Move or even, early Deep Purple, but the lead vocals and harmonies keep it poppy enough not to sound proto "hard rock".  The musical backing on this is killer.  The B-side, "Baby You're Not To Blame" utilizes the same chunky backing formula only the vocals are less poppy.  The bass/guitar/electric piano remind me a lot of the late era Small Faces when they started to get heavy with "Wham Bam Thank You Mam".  It's got balls and the bass is pure genius and I could easily image a lot of long hairs shuffling around the floor to this in some miscellaneous discotheque scene in a cheezy late 60's Hammer film.
Both sides have been on a variety of comps but are also included as bonus cuts on the CD reissue of their 1969 LP "Currency".
Hear "Your Way To Tell Me Go":
http://www.youtube.com/watch?v=RgVh3ZA5IP8

Hear "Baby You're Not To Blame":