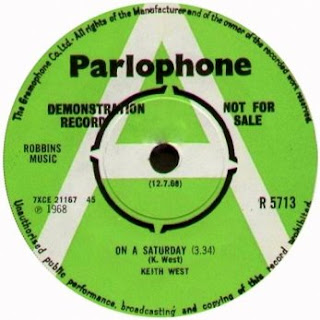 KEITH WEST-On A Saturday/Kid Was A Killer U.K. Parlophone R 5713 1968
After the "Grocer Jack" debacle (see August 5, 2010 entry) the U.K. class of '67 act Tomorrow faded away and by mid 1968 were no more. Lead singer Keith West still had a "solo" contract with EMI's Parlophone branch and set about working on his next single with help from some of his friends (Ron Wood and Ansley Dunbar) and an ex-band mate (Steve Howe). 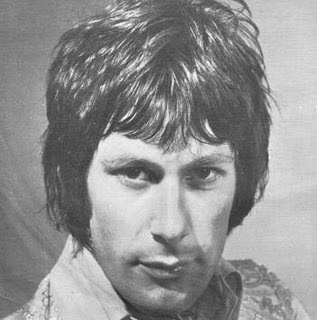 He's our dear old Mr. Keith West
"On A Saturday" is beautiful, easily hands down it's my personal Keith West fave that I always seem to associate with autumn, my favorite season.  Imagine the tranquility of Nick Drake mixed with some electric/eclectic backing (and an interesting Floyd Kramer style piano) and some powerhouse drumming by Ansley Dunbar, all accented by some acoustic guitar.  The flipside harks back to Keith's prior freakbeat days with The In Crowd.  "Kid Was A Killer" was one of the highlight's of Bam Caruso's "Pop Sike Dreams" (Rubble Two) compilation LP and shifts in a very radical direction from it's light hearted A-side.  From it's insane drumming to Steve Howe's rag-esque guitar solo and some off the wall tempo changes it's far more '66 than '68.
Both sides have appeared in many locations, notably as bonus cuts on the last CD reissue of Tomorrow's 1968 LP and  on RPM's excellent Keith West anthology "Excerpts From....Groups And Sessions '65-'74"
Hear "On A Saturday":
http://www.youtube.com/watch?v=T9xoL3j3K60
Hear "Kid Was A Killer":
http://www.youtube.com/watch?v=FLuMaiZao78
By Wilthomer - August 10, 2010