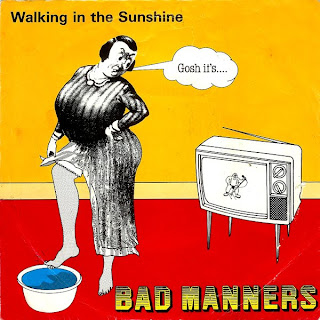 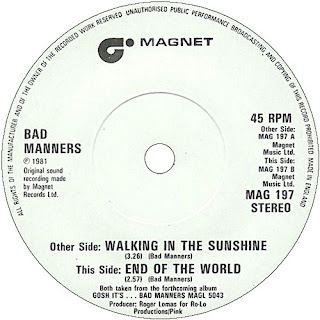 BAD MANNERS-Walking In The Sunshine/End Of The World U.K. Magnet MAG 197 1981

Bad Manners were in a class of their own as far as U.K. 80's "first wave" ska bands were concerned. They weren't as smartly attired as The Specials or The Selecter, they were actuqally nuttier than Madness and not too concerned with covering old Bluebeat/ska records like The Beat or The Bodysnatchers. But like all good first wave 80's British ska bands they were multi racial, fun and knew how to have a good time and in turn ensure their audience did the same! Led by the large and energetic Buster Bloodvessel (Doug Trendle to his mom and dad) they were zany enough to be fodder for kid's shows like "Tis Was", not rudeboy-mod kitted out enough to alienate the non-genre aligned public (owing much in their appearance to Ian Dury's legendary Kilburn & the High Roads who were musically to Madness what Dr. Feelgood were to the Jam)and promised a good night out with their silly shtick. Oddly enough it was this formula that saw them commercially outlast 2-Tone's brief two year chart stint and still remain neck in neck with Madness, who'd managed to extend their fiscal livelihood through a well gauged pop sensibility. Bad Manners chalked up no less than 9 Top 40 U.K. hits before calling it a day in 1987, only to reunite periodically.

My introduction to them came from either the "Dance Craze" soundtrack (when in the hell is that film going to ever be released on DVD?) or "Can Can" on the weekly WNEW "Things From England" (aka "British Things")show where every Friday afternoon the late Scott Muni played songs that were in the British Top 20 which was a major source of  music for me from '80-'82.  I can't recall every fact from the 80's, just most of them. I wasn't really completely grabbed by them till I'd heard "Walking In The Sunshine" on my local college radio station WPRB sometime in early 1982.

To this day the number still resonates with me beyond just youthful nostalgia, it never fails to sound amazing booming out of speakers (especially in the car with the windows down, the moon roof open and the sun in my eyes).  Maybe it's the fat-full horn sound mixed with the bluesy Hammond and the bouncy reggae bass and the infectious riff that made it one of my favorite "new wave" of ska singles.  I was fortunate enough to receive a copy as a B-day gift from my best friend at some point "back then" (along with a horrible quality pressing of "Five Live Yardbirds" if my memory serves me well) and it's still one of my most treasured 80's singles.  The flip "End Of The World" was a bit of that manic mix of sped up horns, bass and keys that sounds straight out of a "I've had too much to drink" scene in an 80's teen movie, or maybe I'm just reminiscing on some of my own recollections of similar experiences, not really my thing, not terrible either. Both tracks wound up on their 1981 U.K. LP "Gosh It's..".

What do you know...here's the original promo video from September 1981!
(note swimmies on the trumpet player!)

Hear "End Of The World":

Sadly it was really hard to find original records of Bad Manners stuff . There's way too many dodgy re-recordings out there. I settled for a somewhat pricey used Magnet CD compilation from a seller at Amazon.co.uk. that featured "Walking.." and a slew of other original recordings of classic Bad Manners ("Lip Up Fatty", "Inner London Violence", "Special Brew", the zany ska version of  "Can Can", the hysterical "Lorriane" and many others). Luckily while doing my homework for this entry I noticed there is now a two CD 36 track "Best Of.." compilation available called "Walking In The Sunshine: The Best Of Bad Manners" (how's that for irony?) that includes all of my picks listed above!

One piece of advice though.  I highly advise everyone to avoid ANY Bad Manners stuff on iTunes like the plague, unless you like cheezy re-recordings....... 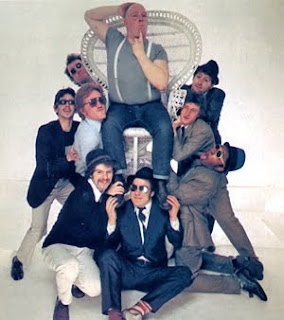