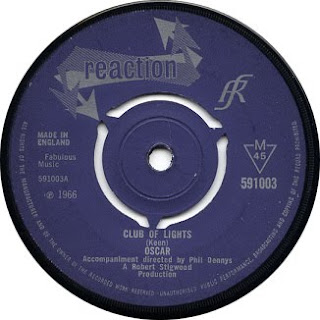 You would think 60's singer Oscar (born Paul Oscar Beuselinck) had it made. His father (Oscar) was The Who's lawyer and presumably these connections got him a deal with Robert Stigwood's Reaction label. Stigwood would also become his manager. Previously he had gone under the moniker of Paul Dean cutting two singles (the last of which was on Reaction) with that name.  A name change to Oscar and a crack at an unreleased Pete Townshend song ("Join My Gang" Reaction 591006) were next.  Despite all this his debut stalled.  For his next Reaction single he was given a track called "Club Of Lights" by one Speedy Keen, a Pete Townshend protege who would go on to give The Who "Armenia City In The Sky" and found Thunderclap Newman.  This too sadly flopped.

"Club Of Lights" is fairly obscure.  I never heard it at any "mod" nights and rarely heard anyone talk about it or mention.  I stumbled upon it because I was collecting anything on Reaction that I could get my hands on and I'd already had his "Join My Gang" 45 which I liked.  "Club Of Lights" is an amazing single.  It starts out with a bit of distorted guitar and a driving beat.  It attempts to be soulful and comes off a bit plastic in that department but what makes it so listenable is it's beat and repetitive "dancing, dancing, dancing" chant in the chorus and lyrics about the discotheque night life. I have to be dead honest and tell you I haven't a clue what the b-side was like, you'd have to ask Ty Jesso (I think he wound up with it, though I could be wrong).

Oscar's next single on Reaction would be a crack at an unissued David Bowie number "Over The Wall We Go", which it is alleged allowed him some TV exposure to promote it, one hopes that will someday surface on YouTube, but like most 60's British television was probably wiped by the stingy BBC.  Oscar would continue to stay under Stigwood's umbrella and once again rename himself  this time Paul Nicholas.  He would go on to play Cousin Kevin in "Tommy", record a host of records (among them his dreadful 70's disco hit "Heaven On The Seventh Floor") and achieve even more ghastly notoriety by appearing in Stigwoods 'Sgt. Pepper's Lonely Heart's Club Band" movie (what WERE The Fab Four thinking when they licenced that abortion or more to the point how much blow were they doing?)

Sadly like most of Oscar's cool Reaction sides this one has eluded a proper reissue thus far.