How I Learned Not to Love The Style Council:One Young Mod's Startling 80's Epiphany 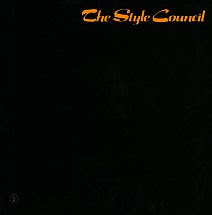 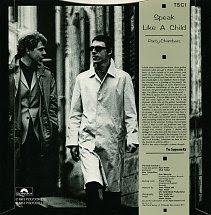 It's the Spring of 1983 and a 16 year old mod is buying up recently reissued Jam singles (all in their eye catching picture sleeves) at the Record Setter when an employee there says "Did you see Paul Weller's new band ?" and hands me the first Style Council single.  Holy sh*t!  It's Weller AND Mick Talbot from The Merton Parkas in a new band!  Gimme!  I got it home.  I was immediately confused by the synths.  I liked Ultravox, and still do ("Vienna" is one of my fave 80's LP's to this day) so I was no stranger to them.  But somehow it didn't gel with me right away.  I actually liked the flip "Party Chambers" better, the synth lick reminded me of the "Price Is Right" theme music and nostalgically took me back to younger days on a Saturday night waiting for "Emergency" to come on.  Eventually I grew to like "Speak Like A Child".  Despite the synth it's a great tune with great lyrics, cool hooks, nice production, neat horns and it's only marred by that dreadful keyboard effect on Merton Mick's solo (can one of  you anoraks tell me what it's called so I can properly malign it in future ventures?) that has heavy sustain and can be heard on all those timelessly awful Whitney Houston records and similar "urban contemporary"  (read "soul-less 80's black music") drivel.  Luckily the song itself is timeless.  What's not to love about a song that sings:

"your clothes are clean and your mind is productive".

And besides Weller looked cool as all f*ck with his shades, French crew, scarf and white mac on the back sleeve!

Paulie wearing a tad too much make-up , moving like Abe Lincoln
@ Disneyland and looking very uncomfortable without a Rickenbacker
to hang on. T.O.T.P. March 1983 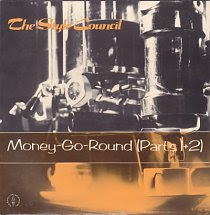 True story here readers, in 1980 there was a batch of 45's of The Jam's "Start" that accidentally had The Village People pressed on the A-side.  They became collector's items, I bought one.  I would have thought this happened again when I heard the second Style Council 45 had I not been pipped by a classmate. Even as a dumb-as-a-rock naive 16 year old I was NOT buying into any record that sounded like Grandmaster Flash or The Sugarhill Gang.  No sir. The Style Council's second single (May 1983) "Money-Go-Round (Parts 1&2)" was, as one man once sang "absolute shit".  You can't imagine my horror when a school-mate (Mike Applestein) said "I heard the new Weller record, it sounded like a rap song".  It arrived a week or so later from Metro Music and damned if he wasn't right. WTF? 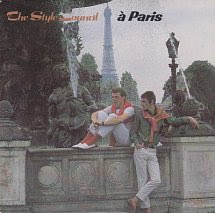 Wow.  So the "A Paris" E.P. looked cool as hell right?  Well maybe not.  I didn't wear loafers without socks till a few summer's back and I still won't wear a sweater around my neck like some Ivy League rent boy. Yeah, so it's the end of the summer of 1983.  I bought a few records before my senior year of high school was about to unfold, I had my first job and already savored the joys of earning $ to buy stuff (first paycheck went to a copy of the Action's "Ultimate Action" and a pair of 2-Tone Jam shoes).  On an expedition to a record store in Menlo Park Mall I got a 12" of Rick Buckler's new band Time U.K. (with the amazing, sing-along, lads friendly "Remember Days"), a David Bowie 10" of all three of his '66 Pye A'S & B's ("Don't Be Fooled by The Name") and the latest Style Council 7" E.P..  Any takers for which one got a thumbs down?  As was the practice after our record store forays the fellas and I took turns at somebody's place (usually Rudie's) playing our purchases.  The needle hit 'The Long Hot Summer" and someone exclaimed "What is this WBLS?".  (WBLS was a NY based radio station that played contemporary black music, mostly smooth jazz, AOR, proto-rap and the dying vestiges of disco). I still shudder on that, that bass synth is dreadful, in fact somebody should round all of those things up and we'll let the world's top surviving bass players (and maybe John Entwistle and James Jamerson's kids) set a torch to them.  I'd take a further ribbing at this number's expense the following year when "My Ever Changing Moods" got some U.S. chart action and MTV began showing other Style Council videos in the hopes of re-launching them (it was called "The Billy Idol Formula" ie once you have a hit all of your earlier records can become hits too if they air the video 20 times a day) and my entire school ( friends included) recoiled in horror as Talbot and Weller shared a kiss in the "Long Hot Summer" video.  After the fallout he dialogue went like this:

Best Friend: "So your boy Weller's a homo huh?"

Cool girl on first date: "I thought that was really cool that they did that" (Whaaaaaa?)

Interestingly enough I never saw the video until maybe the 90's?!  And despite being not the least bit homophobic it was a bit too much for me.

The E.P. did have a saving grace.  Mick Talbot got to lay down a jazzy instrumental version of 'Party Chambers" with his piano and B-3 (he did that a few more times, though never enough and often marred by a bass synth) that swung like fuck. In fact there was later an amazing 7" E.P. of all of Mick's groovy TSC jazzy instrumentals called "Mick Talbot Is Agent 88". I snagged it and then sold it a few years ago for a decent price, another one I will never be able to afford to re-purchase. 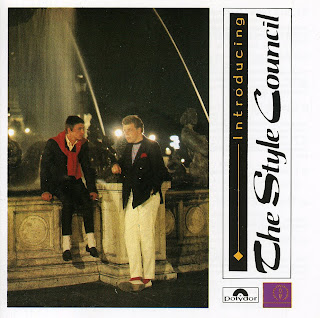