Shut Up, Listen and Dance! 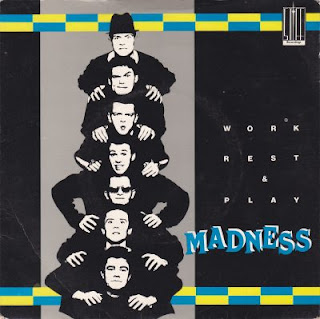 MADNESS-Work Rest & Play E.P.: Night Boat To Cairo/Deceives The Eye/Young And Old/Don't Quote Me On That U.K. Stiff BUY 71 1980
There's no point on giving you the complete rundown on Camden Town, London's most famous band. Indeed Madness are without a shadow of a doubt Britain's must commercially successful ska band, though their sound incorporates much more than Jamaican sounds (owing much more to Ian Dury's first band Kilburn & the High Roads).
Expanded to a seven piece by late 1979 this was the band's 4th 7" release. The showcase of the E.P. is the frantic "Night Boat To Cairo" which is as much a signature tune of the band as any. Interestingly enough all four tracks are band originals. Madness ability to build a slew of originals this early on in their recording career gave them the longevity their peers lacked and it also set them apart from contemporaries who occasionally relied on old Jamaican 60's tracks to flesh up their repertoires. This was actually the first British ska record I owned which I ordered from Stiff records by mail sometime in late 1980 or early 1981.


"Night Boat To Cairo", led by sax player Lee "Kicks" Thompson's nimble solo is a glorious affair for anyone who's not had the pleasure. With lead singer Sugg's distinct London accent and sweeping strings beneath it all the number evokes the days of the Empire when pasty white English squaddies were doing their National Service all around the globe as put by one WWII North African veteran "their knees not yet brown".

"Deceives The Eye" is a cheeky little number about the life and times of a petty shoplifter and contains the usual giddy, jauntiness that made Madness the "Nutty Boys" that they were (are?).  On the flip we have the Hammond organ led "Young And Old" a distinctly British number that evokes knees up's, brown ales, scullery women and Ealing comedies and concerns at night out on the piss. It's one of my favorites by them and seems to usually elude Madness CD compilation compilers, which is a shame and features a great line about a youthful night at the boozer: "old men in the morning, young men at night". The band had drawn a bit of flak for the large number of British Movement/National Front supporting skinheads who followed the band.  The band made the "Beatles Are Bigger Than Jesus" move by stating they didn't care who came to their gigs as long as they came to dance and have a good time.  A brief bit of fury ensued in the press, but this blew over soon enough once the band ditched their skinhead gear, grew flat tops and started wearing baggy, way out clobber.  "Don't Quote Me On That" is a piss take all about the whole experience, shouted, rather than sung, by Chas Smash, the band's "toaster".  The track's message is simple: "what I said they took it all the wrong way" and finally, "shut up, listen and dance".  Amen

Luckily all four tracks are on their wonderful CD compilation "The Business"!

Hear "Young And Old" and "Don't Quote Me On That": 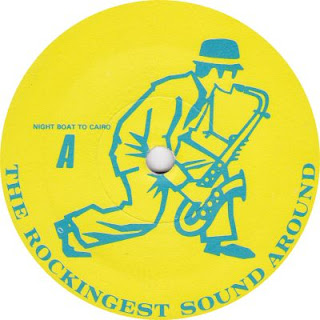