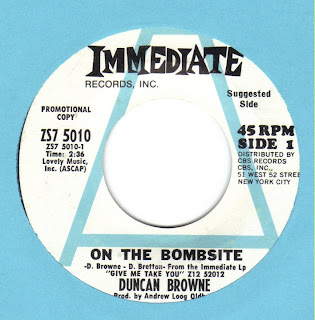 The name Duncan Browne usually doesn't raise too many eyebrows.  He's known among us anorak's for his rare 1968 Immediate LP "Give Me Take You"(U.K. IMPS 018 and amazingly, according to this 45's label, U.S. Z12 52012. Has anyone ever seen a U.S. pressing?). Though not as heinously collectible as the Billy Nicholl's LP on the same label it's still a scarce one. I can't tell you much about Duncan Browne other than I like his stuff.  His music would fall into the same genre as Nick Drake, early Al Stewart or Bill Fay in my estimation had any of them been backed by The Zombies.  Any of the album's tracks would not be at all out of place on Chad & Jeremy's "Of Cabbages and Kings" LP (see June 18, 2010 entry).

"On The Bomb Site" is a work of choral pop precision with it's angelic voices, muted horns, and harpsichord wrapped around Duncan's Colin Blunstone-ish tones and acoustic guitar.  The lyrics are decidedly English and evoke the oft discussed childhood past time of playing on bombsites that littered post war Britain with:

There are some creative metaphors about growing old and leaving childhood games behind amidst the lush arrangements:

All in all it's a wonderfully, wistful paean to the simpler times and the carefree days of youth before the weight of the world and adulthood came along and ruined it all.

"Alfred Bell" starts out with a chorus of children chanting on a playground (or bombsite?)

"Alfred Bell he's no good chop him up for firewood..."

It's less orchestrated than the A-side and reminds me of Cat Stevens more somber moments on either one of his Deram LP's .  Lyrically it's another social observation in that great vein of British 60's vignette songs.  This time it's about a lonely, old, sad teacher from dawn to dusk, another perfect British 60's personal encapsulation of a sad, tragic, yet fictional figure. 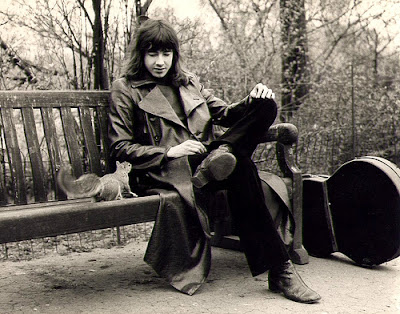 Here's a couple of mentions of Duncan Browne's US releases from Billboard via Google Books:

I have a US copy of Duncan Browne's Immediate LP, with lyric insert. - JT

Hello.
I too have both the American LP "Give Me Take You" and the American single in photo sleeve "On the Bombsite", both by Immediate.
I am in the process of posting a discography of Duncan on Rate Your Music,
http://rateyourmusic.com
General information on Duncan can be found on the Duncan Browne Tribute site and the Duncan Browne Tribute Forum http://insyncnet.com/dbforum Best, jehanbosch

Very nice blog. If anyone is interested:www.hpeters.eu
Lots of Duncan, Metro and Peter.