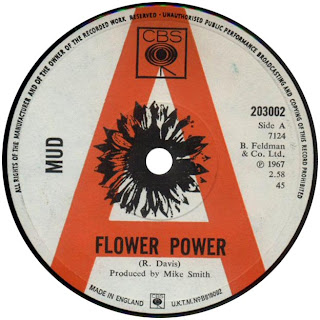 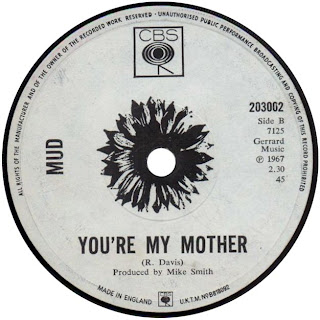 MUD-Flower Power/You're My Mother U.K. CBS 203002 1967
Some of you might be familiar with the U.K. 70's glam foursome known as Mud, but did you know that they began in the 60's and cut an amazing two sider in 1967 as their debut release?
Don't ask me who they were, I don't know, maybe Wikipedia can tell you....On the "A" side we have a ditty called "Flower Power", it was 1967 so you'd expect this sort of thing.  It's a total cash-in with ultra cheezy lyrics (with some touches of skepticism) but it's delivered in that "West Coast harmony" via the U.K. style that I so often espouse here ala Florbunda Rose, The Montanas, The Pyramid, The Bystanders et al. Very catchy! The flip, "You're My Mother" reminds me more of the late '66/early '67 Move both musically and lyrically sounding like one of those odd things Roy Wood wrote early on.  The lyrics are actual pretty creepy, basically about a guy who's complaining that his mother is always too touchy feely with him, punctuated by some nice high "Oooooo's" ala The Who or the Game.  Weird!
Both sides made it onto the Repertoire CD compilation "The Singles 1967-1978".
By Wilthomer - March 11, 2011

Email ThisBlogThis!Share to TwitterShare to FacebookShare to Pinterest
Labels: Mud

Hmmm hadn't heard this, I knew Mud must have done something decent!