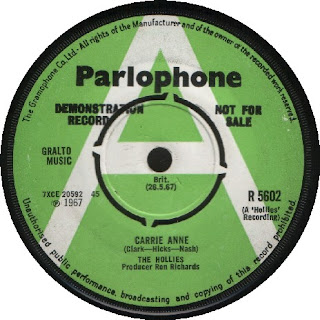 THE HOLLIES-Carrie Anne/Signs That Will Never Change U.K. Parlophone R 5602 1967
Like The Beatles, The Stones and The Kinks, my favorite period for The Hollies is late '65 to early '68.  There's something about how The Stones, Beatles and The Hollies all seemed to keep pace with each other with trends and musical styles (something our boys from Muswell Hill didn't seem to follow).
Despite the Summer of Love and all the trippy hippiness that came with it "Carrie Anne" contains none of that, its really just an archetype "boy infatuated with girl" song.  Was it not one of The Hollies who once mused "We're about as psychedelic as a pint of brown ale"?  No sitars (though there is a nice Trinidadian steel drum solo!) just the precision pop harmonies they're known for and Graham Nash and Tony Hicks each getting a verse in behind Allan Clarke's lead vocals.  Though they did make a VERY trippy promo film to go with it (see for yourself below).  "Signs That Will Never Change" had a previous airing on the Everly Brothers "Two Yanks In England" album (released in July 1966) alongside 7 other Clarke/Hicks/Nash compositions (under the moniker "L Ransford") but this was the first Hollies release of the track.  Starting with some really cool phased in harmonies and a hypnotic strong riff it builds a bridge between the "beat group" era and the dawning "psychedelic era" of Hollies music. 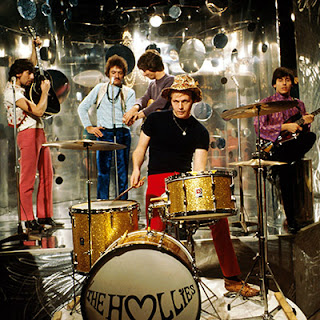 Email ThisBlogThis!Share to TwitterShare to FacebookShare to Pinterest
Labels: The Hollies

An underrated band imho, I don't think many people take them that seriously. Great pop songs are great for a reason you know?!? Love 'em.

During the early 80s I remember buying all of The Hollies singles on Parlophone when I was in my late teens and couldn't believe how GREAT their B-Sides were.

Back then every town and City had at least 5 second hand record shops and I raided The Hollies sections for months until I had every release.

I'll second Mr. Medd's opinion (as well as everybody else's). The Hollies were rather underrated (like Manfred Mann) probably because all they wanted to do is to put out great songs.

Also, that Everly Brothers album Two Yanks In England is pretty good, as well as most of their output from that time (the original version of "Man With The Money")