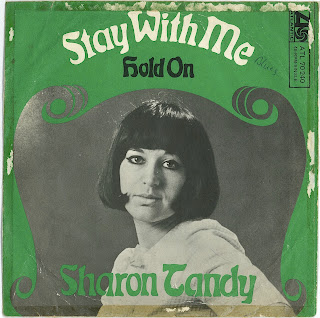 I'm guilty of nicking this picture sleeve from the net because foolishly, I never scanned mine before I sold it (though mine was equally ratty).  It came from a haul that was the result of one and a half days on the floor of the Princeton Record exchange poring through 100's of boxes of 45's they'd recently acquired from the since closed Radio Free Europe.  Most of the good stuff had been snagged I'm told before the records hit the floor by staff and a few select dealers, but my friend and I struck early with lunch breaks at the Athenian (R.I.P.) and dinner at the Alchemist & Barrister afterwards and over two days combed through every box (other boxes mysteriously appeared over the next few months, one containing "Crawdaddy Simone" but that's a story for another day).  I scored some pretty cool stuff and since Radio Free Europe was based in Germany a great deal of the 45's there were German pressings, like this one.

For those not in the known, Sharon Tandy was from South Africa and came to England to further her music career.  She cut several 45's in the U.K. starting in 1965, this was her fifth in July 1967.  The "A" side is a passable version of Lorraine Ellison's "Stay With Me", I don't really care for the track no matter who's doing it so let's move on.  I bought this record for the flip "Hold On".  "Hold On" was simultaneously released on the flip of "Reflections of Charles Brown" by the studio concoction known as Rupert's People (Columbia DB 8226) featuring members of The Fleur De Ly's.  Coincidentally Sharon was backed on her version by the very same mighty freakbeat legends The Fleur De Ly's (both acts shared the same manager).  The number is driven by some of the band's blistering trademark guitar work and Sharon's breathy/sexy husky vocals move it along nicely.  The band would also back her on the equally rocking "Daughter Of The Sun", recorded at the same session and later issued as the flipside of a relaunching of "Hold On" in the U.K. in October 1968.

Both sides were included on Big Beat's CD retrospective of her 60's career "You Gotta Believe It".

Below are clips from German TV's "Beat Club" where Sharon plugs both sides: