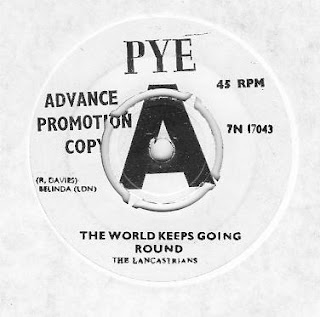 This was the next to last of six 45s by a U.K. group called the Lancastrians.  All of their singles were on Pye and all of them (save their last, an ill advised cover of the U.S. chest thumping flag waving hit "Ballad Of The Green Berets") are quite listenable.

The Lancastrian's version of the Ray Davies composition, "The World Keeps Going Round" was released in January 1966 and had previously appeared on The Kinks album "Kontroversy" in November 1965.  The Lancastrians version is actually stronger than The Kinks, with a "heavy" sound with the band playing a bit harder edged than the original.  Like all of their tracks, the vocals are very strong and high/upfront in the mix.  "It's Not The Same Anymore" is a somber ballad, pretty mundane stuff compared to their other rocking sides and is easily forgotten up against the majority of their catalog.

Both sides reputedly feature the guitar talents of Jimmy Page and were produced by Shel Talmy, who produced all of their singles.

Hear "The World Keeps Going Round":

Hear "It's Not The Same Anymore":

Email ThisBlogThis!Share to TwitterShare to FacebookShare to Pinterest
Labels: Ray Davies The Lancastrians