The Man Who Sold The World (On Mr. Fish Man Dresses) 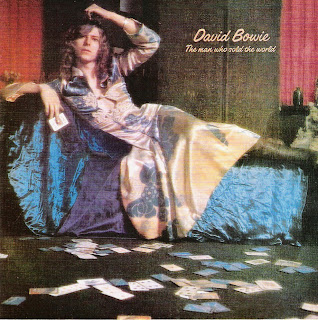 DAVID BOWIE-"The Man Who Sold The World" LP U.K. Mercury 6338 041 1971
SIDE ONE:
1. The Width Of A Circle
2. All The Madmen
3. Black Country Rock
4. After All
SIDE TWO:
1. Running Gun Blues
2. Savior Machine
3. She Shook Me Cold
4. The Man Who Sold The World
5. The Supermen
"The Man Who Sold The World" was Bowie's third LP, his second on the Mercury label and his first album of the 1970's.  His backing band has yet to solidify but the personnel on the LP consisted of David on vocals, acoustic guitar and stylophone, Mick Ronson on guitar, Tony Visconti on bass and piano, Mick Woodmansey on drums and Ralph Mace adding Moog synthesiser.  Best known for it's "dress cover" of Bowie reclining in his Mr. Fish "dress" and Veronica Lake hairdo, it marked a shift into "heavier sounds" thanks to Ronson's Jeff Beck inspired guitar solos and not a track on the disc runs shorter than three minutes.
The album opens with the heavier than air opus "Width Of a Circle".  The number goes through varying phases and tempo changes almost making it several songs within a song (akin to King Crimson's "In The Court Of The Crimson King") with cryptic lyrics typical of the period (eccentrically mentioning author/poet Kahalil Gibran).  It's a great track though clocking in at 8:05 it's a bit too long and ponderous. "All The Madman" can equally be compared to King Crimson with it's use of woodwinds and a slight Medieval feel to it before Ronson and the band kick in with their rocking-ness.  Bowie's vocals are quite spirited and the track is certainly my fave on the platter with it's lyrics leaning towards the subject of madness, not the first time Bowie visited it and certainly wouldn't be the last.  It winds up (down?) with some "Clockwork Orange" soundtrack sounding synths.  "Black Country Rock" is another raucous affair without being too over the top in it's heaviness.  During one of  Ronson's many trills of the hypnotic main lick Bowie lets rip with a warbly Bolan noise, which can't have improved frosty matters between the former friends soon to turn glam competitors. "After All" is an eerie track.  The varispeed backing vocals (which at times resemble that of small children) chanting "Oh By Jingo" (a phrase picked up from a World War II acquaintance) are just wiggy, especially when coupled with the return of "Space Oddity's" Stylophone and more "Clockwork Orange" meets baroque synth (predating a sound The Stranglers were so fond of). 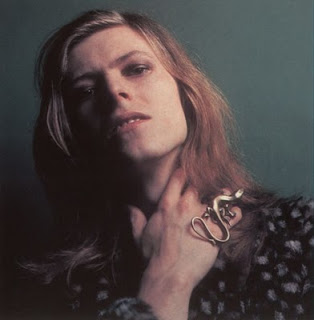 Side Two kicks off with "Running Gun Blues" is a mundane Vietnam era ode to kill happy soldier with uncool lines about "I'll rape the gooks and smash their heads", all delivered in a much too cheeky manner and at a pitch perhaps too high for Bowie's delivery.  The music is pretty cool, especially the Roxy-esque synth but the lyrics are just plain awful. Next. "Savior Machine" runs awash in "Quadrophenia" friendly symphonic synthesizer but fails to move me despite it's jazzy little changes and the guitar and synth licks borrowed from an old 1968 Bowie track he did with his folk trio Feathers called "Ching-A-Ling". "She Shook Me Cold" is a cold as the corpse of Hendrix whom the opening licks seem to attempt to summon, it's cod metal, empty, uninteresting and filler as far as I'm concerned. Bowie's vocals are so forward in the mix it sounds like a pre-gig sound check run through of a track the band hasn't learned completely and the lead singer is still spontaneously composing new lyrics to. "The Man Who Sold The World" rates in my estimation as the best 70's pre- Ziggy Bowie at his best, from it's deadpan delivery to it's absorbing social observation lyrics, even the dreadful cover by some trio of grunge scumbags in the 90's can't shake my faith in this track.  This is greatness at work kids...."The Supermen" launches into Bowie's first foray into the turf of uber-wanker Nietzsche. Pretentious philosophers aside it's a great track. The heavy duty riff chugs away while the backing vocals chant in descending tones like a Satanic manta, this is the devil's music kids, and I like it.
As you will see below the album became quite celebrated for it's varying releases in different artwork around the world.......
Lest the "man in a dress" cover offend Mercury over in the U.S. issued this odd cartoon cover album depicted below as Mercury 61325: 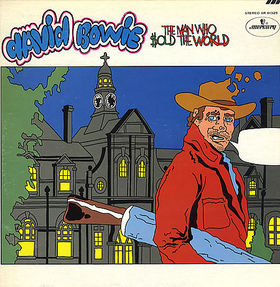 Once Ziggy Stardust was unleashed and the world went Bowie-mad RCA reissued the LP (having acquired Bowie's scant Mercury catalog), and like Bowie's 2nd untitled LP (retitled "Space Oddity" for it's U.S. Ziggy era reissue) it sported a cover with a Ziggy era photo to confuse the record buyers into believing they'd had a new Ziggy product (the same was tried with countless compilations of Deram/Pye material well into the 80's).  Below is the RCA LSP 4618 1972 reissue: 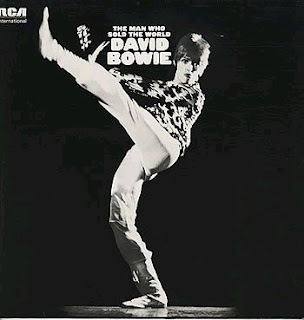 The Germans got an even better treat and were furnished with this wiggy circular sleeve that folded out ala The Small Face's "Ogden's Nut Gone Flake" album as Mercury 6338 041: 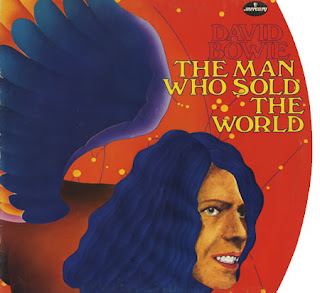 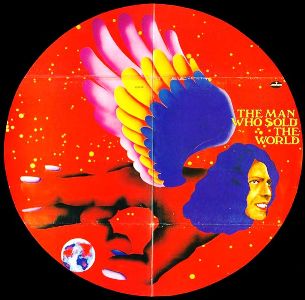 Width Of A Circle is probably one of Bowie's finest tunes, wouldn't you agree? It's up there with Kooks and Five Years. Shame he lost his mojo so early. The artist formerly known as Davy Jones should have called it a day circa 1983.

What a Killer lp!!

I played it to death that year. Recall transfering it to cassette and playing it on a big Panasonic machine while in Italy that summer.Remember playing it real loud while atop Mt. Vesuvius in Naples. Wow, great experience !

Loved the sci-fi sounding melodic string synth lines. It clearly is a one-of-a-kind musical product ....unique, like 'Court of Crimson King' or 'Sgt. Peppers'. It had no competition that year; blew everyone away.

Master work for Bowie and all involved! Great production for Tony Visconti.