Straight From Merthyr Tydfil It's The Bystanders 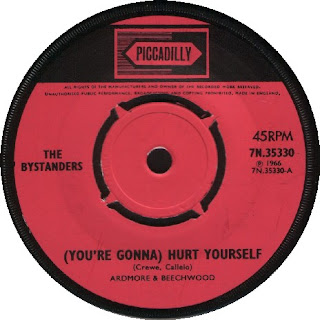 Before they evolved (or de-evolved) into shirtless hairies Man Vic Oakley (vocals), Micky Jones (guitar), Ray Williams (bass), Clive john (keyboards) and Jeff Jones (drums) were The Bystanders, a harmony/pop group from Merthyr Tydfil, Wales who cut 7 singles for the Piccadilly label between 1966 and 1968.  The Bystanders were quite versatile thanks to their multi harmony advantage and were adept at both West Coast pop, "supper club soul" and what I like to call "cabaret psychedelia". 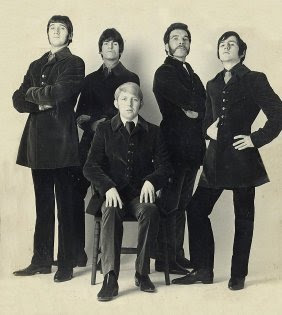 The band had previously cut several unreleased cuts for Joe Meek (one of which, "She Comforts My Sorrow" was unearthed in 2008 for the Castle CD compilation "Joe Meek Freakbeat:You're Holding Me Down") and a rare as hell 45 for the Pylot label "That's The End" b/w "This Time" (Pylot WD 501) in 1965.  This was their debut release on Pye's Piccadilly imprint.  They chose a cover of Frankie Vali's January 1966 "solo" single "(You're Gonna) Hurt Yourself" as their debut 45 in June of 1966 (they also recorded a version of one of Vali's other "solo" 45s "You're Ready Now" which was not released until the 90's on a CD compilation of their work).  Covers of American vocal/harmony pop numbers (with the occasional venture into soul music) formed a bulk of their well honed live act so it was probably no surprise that they went with an American number as their debut "A"-side. Their version is a bit faster than the original and certainly harder and even, if I may add, more soulful.  It's easily my favorite track of theirs.  The flip side is not a terrible track it's just boring, a mid tempo vocal number that hits an octave too high for my ears (in a way that only The Four Seasons can so obviously they achieved their presumed goal of sounding like them on this) and offers none of the vigor or soul that the "A" side does.

The band would go on to cover lots of other U.S. hits like Keith's "98.6" (which was recently utilized in the dreadful Pirate Radio flick "The Boat The Rocked", or as they called it here in the States, "Pirate Radio") and Jimmy Webb's "Pattern People" and an English language version of Spain's Los Brinco's "Mejor" retitled ""Make Up Your Mind" (Los Brincos cut two U.K. 45's for Page One as part of the short lived Iberian invasion in the U.K. along with Los Iberos and Los Bravos). They also interestingly cut a number called "When Jezamine Goes" in 1968 which most likely to their horror was later recorded by The Casuals and became a huge U.K. hit for them (and it boasted "Cave of Clear Light" on the flip, their trippiest record of all perhaps offering some indication of things to come).

Both tracks were collected on two now out of print CD collections of their work, See For Mile's "The Birth Of Man" and Castle's "The Pattern People: The Pye Anthology".  "(You're Gonna) Hurt Yourself" appeared on Castle's "Doin The Mod Volume 5: That Driving Beat" and  Sequel's "Ripples Volume Four: Uptown Girls And Big City Boys".

Hear "(You're Gonna) Hurt Yourself":

Hear "Have I Offended The Girl":

Email ThisBlogThis!Share to TwitterShare to FacebookShare to Pinterest
Labels: The Bystanders