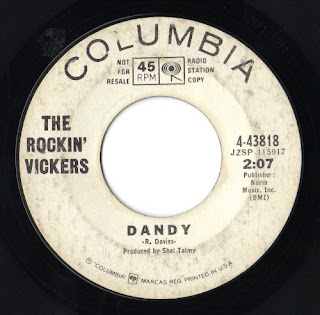 This was to be the final Rockin' Vickers single and it was produced by the legendary Shel Talmy (Who, Kinks etc).  Their connection with Talmy gave them access, presumably to some Ray Davie's tracks (there's an unreleased Ray Davie's number they cut in '66 called "Little Rosie" that was contained on their CD compilation). "Dandy" was never released as a single by The Kinks and sadly The Vickers release in the U.K. of it as an "A" side in November 1966 had been preceeded a month earlier by a dreadful version by a square as hell looking and sounding gent named Clinton Ford (Pye 7N 35343), neither version charted though Herman's Hermits took it to #5 in the U.S. charts in September 1966 (without a U.K. release)!

The Rockin' Vickers version is not bad, it's far closer to The Kinks version (which appeared on the "Face To Face" LP) than any of the other versions and though it starts out with an acoustic guitar it's got a bit more cranked up electric guitar than The Kinks and played slightly faster, sort of "out Kink's-ing the Kinks" if you will.  The real gem is the flip side, "I Don't Need Your Kind". From it's distorted guitar, sneering vocals and ragged beat and it's a brutal garage punk type record (with a simplistic solo from Lemmy worthy of anything on "Back From The Grave").  Nicky Hopkins (presumably) adds ivory tinkling which gives it the feel of any top shelf Who track circa '65.

Both sides were collected on the RPM Rockin' Vickers CD compilation "Lifelines:The Complete Rocking Vickers", which I believe may be out of print. 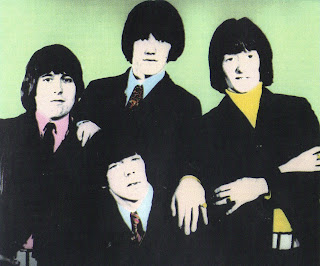 Hear "I Don't Need Your Kind": 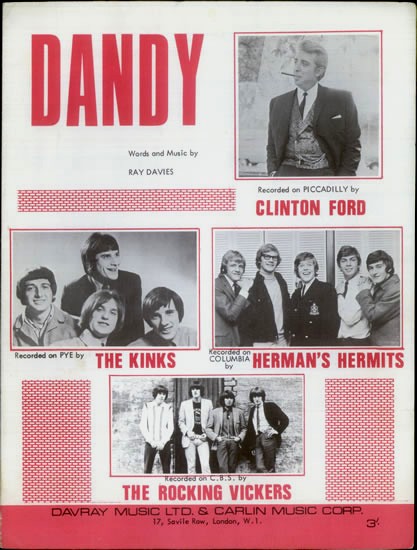