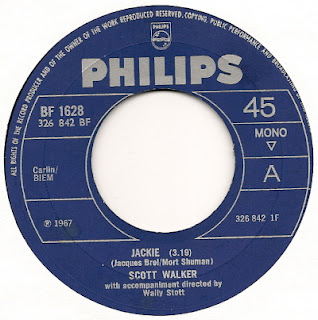 But for the most part they were weak and Gary, well Gary didn't even play drums like he was supposed to due to some sort of contractual issue or sing (he did go on to form the brilliant Gary Walker & the Rain) see:

So who was carrying all the water?  Pretty freakin' obvious. It did not take long before the band's label, Phillips, launched Scott's solo career with this debut 45. 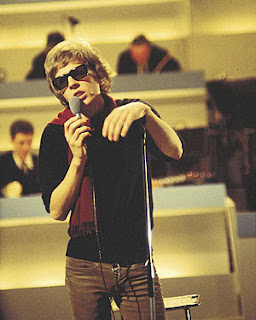 "Jackie" was Scott's first of many stabs at material by Jacques Brel.  I've never been big on Jacques Brel but I'll have to say I've dug what Scott Walker has done with his stuff.  The "*uck you" sort of attitude he sings with on "Jackie" complete with over affected pronunciations never ceases to amuse me amid Wally Stot's storming orchestral accompaniment. And of course the track was a perfect vehicle for his wildly expressive stage persona full of gestures, face pulling and over the top campiness, especially on the TV (see the poor quality clip below). Best of all how many songs do you know that entered the top 40 with the line "in a stupid ass way"? It halted at #22 in the U.K. singles charts. On the flip we have an eerily twisted Scott Walker original called "The Plague", it's probably the closest Scott ever got to psychedelia, and certainly the only thing he did close to it.  It's a musical equivalent to a painting by Hieronymus Bosch, from the haunting "la la la la la's" by a chorus of female vocalists, to the sweeping strings (that get warped, sped up and run backwards at varying intervea;s during the track) while Scott sings his bleak, trippy lyrics in an almost disembodied voice.  The vocals are mixed very high upfront while the cacophony of madness plays behind giving the impression he's walled in someplace and his voice is bouncing off the walls.  Towards the ending he sings backed only by a faint ghostly organ and some slowly disintegrating drums and it's over, as eerie as it began. 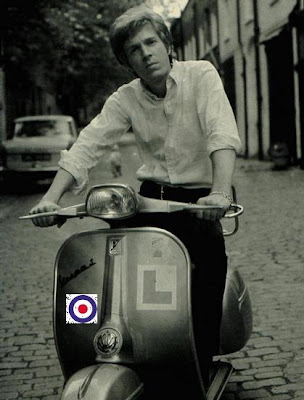 "Jackie" turned up on Scott's second solo LP "Scott 2" whilst "The Plague" is on the essential intro to his solo work (which was where my Scott Walker odyssey began), the compilation LP/CD "Boy Child".

I'm ridiculously obsessed with Scott at the moment, I love that he was soo an anti heartthrob, I've just scanned a ton of pics & interviews of him from Rave mags, so stay tuned to see some on my blog!

Yay! I look fwd to to seeing/reading that, his 60's period way better than his current phase of slapping frozen meat for percussion.