Heroes of the Hammond:Brian Auger & the Trinity 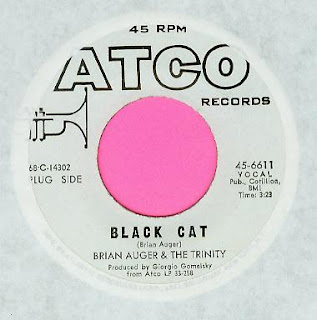 This one is interesting because it was not released as a single in Auger's home country but was in Europe and in the case of today's specimen; the U.S.A.  Recorded and released simultaneously as Auger and the Trinity were performing with Julie Driscoll, both tracks on this platter can be found on their 1967 debut LP "Open".

"Black Cat" is rarity of sorts because not only is it an Auger original (the Trinity were heavily reliant on U.S. jazz/r&b covers) but Auger sings on it as well, something he did not often do with The Trinity as a majority of their cuts without Jools were instrumentals. Following in the tradition set forth with "Tiger" (see January 12, 2011 "Anorak Thing" ), "Black Cat" is a stormer full of potent blasts of "Hammond n' horns".  It provides an ample showcase into the B-3 Hammond prowess of Brian Auger, whom I regard, hands down as the best British organ player ever.  One view of him performing it live on German TV's "Beat Beat Beat" should silence any naysayers (see below for yourself).  The flip side, "In And Out" is pretty much a note for note cover of the Wes Montgomery track, Auger and company were big fans of Wes Montgomery (basing their version of the Beatle's "A Day In The Life" from their "Definitely What" album around Montgomery's interpretation) which isn't a bad thing because Auger was and still is, like Georgie Fame adept at playing U.S. 60's jazz songs without butchering them or sounding flimsy or thin (something many U.K. r&b artists were not always masters at in my estimation) .

As indicated earlier both sides can be found on the CD reissue of the LP "Open".