1. ACTION NOW-"Try"
Cutesy L.A. 80's power pop with 60's influences but VERY 80's production (esp. those awful hand claps), featuring future Pandoras founder the late Paula Pierce (that's her above proving she didn't go commando).  Good stuff and still sounds as good as it did in the 80's on one of the "Rodney On The R.O.Q" LP volumes that brought it to my attention via Paula's squeaky clean/crisp backing vocals.

2. XTC-"Towers Of London"
Back in the day at the onset of my mod-dom I mused aloud to all and sundry that "Black sea" by XTC was the perfect "mod" album as it was more English than "Setting Sons", that is all perfectly true but I was also a 14 year old talking a load of smack.  These days it's the 80's "Village Green Preservation Society" in my book and no better illustrated by this cut, and besides when's the last time you heard a song that made mention of "virgins from Stepney walking pretty ladies by"?

3. 4 SKINS-"Plastic Gangster"
My punk rock pals would be turning in their graves if they could see I'd posted a Four Skins track on my music picks list.   A friend popped it up on FaceBook a few weeks back and surprisingly this it's quite good, it sounds almost like a jaunty/cheeky Madness cut and the lyrics are hysterical.

5. THE APPLE-"Buffalo Billycan"
Brilliant bit of U.K. po-psych '68 style, not at all "heavy", quite "poppy" but with enough dazzling breaks to show their razor sharp mod/freakbeat roots and enough '67 Floydian whimsy to earn the "psych" tag.  It is also, hands down one of the most lyrically indecipherable 60's tracks I've heard! 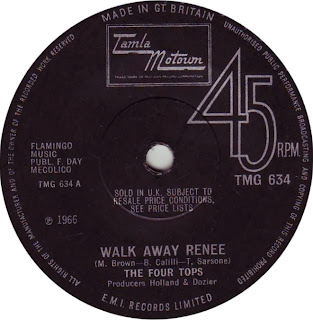 6. THE FOUR TOPS-"Walk Away Renee"
In the 60's The Four Tops could pretty much pull off anything, including The Left Banke, dig Levi Stubb's amazing vocals and the instrumentation/production are out of sight!

7. DAVID BOWIE-"Life On Mars"
Been playing the crap out of this, never gets old, never.  Possibly the Dame's most oblique and unique lyrics, ever.

8. JET HARRIS-"You Don't Live Twice"
Flipside of his 1967 cover of The Trogg's "My Lady", this ones a bit of a crooner number but the orchestration is tops and believe it or not so is Jet's delivery! R.I.P. Jet.

9. THE IGUANA-"Imagine This"
The crown jewel of Big Beat's "Peculiar Hole in The Sky:Pop Psych From Downunder" Australian 60's psych-pop comp CD is this harmony drenched gem by a bunch of Aussie's who worshipped The Association and The Action.  Harmony pop perfection! 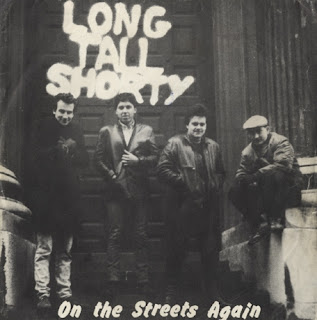 10. LONG TALL SHORTY-"On The Streets Again"
When I hit London in Autumn 1984 there were two records everyone was on about: The Scene's "Something That You Said" and this one by a punky 4 piece "mod".  I'd be hard pressed to call this a "mod" record, it owes more to The Heartbreakers meet the Angelic Upstarts (L.T.S's leader, Tony Perfect was in the latter I'm told) but it still works for me!
By Wilthomer - March 27, 2011

Quite right to clump that LTS single with The Scene one. Very much a pair in my mind too - both on Diamond and both with posters that adorned my bedroom walls. The Scene still has a certain charm but can't remember anything about the LTS one. Will dig it out.

My walls as well Monkey! If I'm correct I think those posters maybe came with the records? I know the LTS one did anyway. I still have them both stuffed into the 45 sleeves, full of push pin holes and old tape residue!

"Up the Junction" is a great song, probably the best Squeeze song ever.