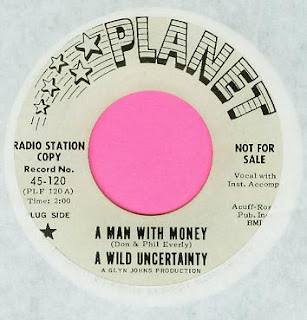 A WILD UNCERTAINTY-A Man With Money/Broken Truth U.S. Planet 45-120 1966
I've no bloody idea who A Wild Uncertainty were, I do know their keyboardist, Phil Sawyer went on the join the Spencer Davis Group Mk. II after the Windwood brothers split.  What I can tell you is that they were a U.K. 60's four piece (I've seen some Euro picture sleeves for this single, that's how I know) and this was their sole release on Shel Talmy's short lived Planet label.  Thanks to a Google search I found a website about their lead singer and the listed line-up was: Tony Sawa (lead vocals/bass), Pete Tidemarsh (guitar), Phil Sawyer (keyboards) and Gordon Barton (drums). Like many a sharp mid 60's U.K. moddy combo they were managed by Don Arden, E.I.A.H (Evil Incarnate Ass Hole). 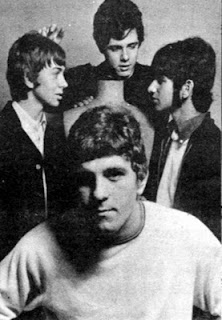 "Man With Money" rates in my estimation as the finest track The Everly Brothers ever wrote or recorded, released back in October 1965 on their "Beat & Soul" LP and utilized as a "B" side to their version of "Love is Strange" on both sides of the Atlantic.  If you haven't heard it you need to , it's mind blowing. Obviously a lot of folks in England thought so too because The Who cut a version of it in August 1966 (which stayed in the vault's till the mid 90's) as well as playing it live onstage and in a 1966 B.B.C. session.  The Eyes were the first to commit it to vinyl as the "A" side to their third single (Mercury MF 910) in May of 1966 and probably heard it from The Who, as The Eyes well, they made some great records but I'd hardly portray them as trendsetters.  This version dates from October of 1966 and was one of Planet's last three releases, for some reason both the U.S. and U.K. issues of this single inserted an "A" into the title. I'll have to say it's certainly not better than the original but far better than both The Who and The Eye's versions. This specimen is far more uptempo and harder with a nice freakbeat feel to the guitar work (reminiscent of The Fleur De Ly's actually) and the harpsichord bit in the middle is pretty novel.  The flipside, "Broken Truth" is  fairly decent, following pretty much the same formula as the "A" side and sounding a lot like something The Blues Magoos would've done.
Both sides were selected for RPM's now out of print essential "The Best of Planet Records" CD retrospective.
Hear "Man With Money":
http://www.youtube.com/watch?v=gjlSSy0xkA4
By Wilthomer - March 23, 2011

A great version of "Man With Money" & the original is one of my fave rave Everly Bros. songs. Speaking of which, I have it on the Rhino CD box set of theirs & it is the most "hottest" sounding songs that I ever heard, especially over the headphones. Is the vinyl just as intense sounding?
(In a previous misive of mone I said that it appeared in "Two Yanks In England, I was wrong)

Another thing, I just remembered that the Wild Uncertainity version of "Man With Money" can also be found on English Freakbeat Vol. 5
(the A.I.P. series)

Eddie Hardin was the keyboardist that went on to SDG.

Two different websites mention two different managers for A Wild Uncertainty: Andrew Loogham and Reggie King. Can you shed any light on who was the REAL manager of this group.

I'm drawing a blank on that one Bob, apologies!

Actual Manager was Reg King.
Sorry this is a bit late but only just seen it.
Tony Savva