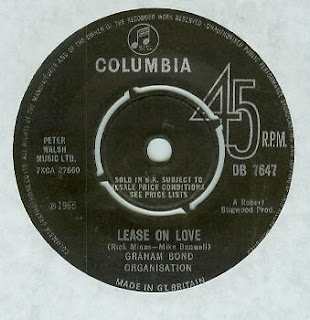 Little known to most of the world who inaccurately often refer to The Moody Blues as the first "pop" (ie in the "rock n' roll" sense) group to use the mysterious Mellotron, is the fact that the Graham Bond Organisation did so first. Though there's no footage remaining (that we know of) to prove it I did read in vintage magazine clippings that Graham and Co. used one on "Ready Steady Go" to promote their new single "Lease On Love" (and below see photos from that episode) and that he gave host Cathy McGowan a demo of how it worked on the show, now wouldn't that be cool to see pop up on YouTube?  Ah we can dream can't we?

Anyway it was with it that the G.B.O. unleashed their 4th single in August of 1965 (their 4th as the G.B.O though the band had also backed Duffy Power which was sort of their vinyl debut, we'll get to that one someday I promise!).  The Mellotron would also be used on their second and final album "There's A Bond Between Us" (especially prevalent on the amazing Jack Bruce sung "Hear Me Calling Your Name").  As most of you may know and for those who don't the band comprised of Bond (lead vocals/keyboards), Jack Bruce (bass/vocals/harmonica) Dick Heckstall-Smith (sax) and Ginger Baker (drums). "Lease On Love" has an almost gospel feel to it with Jack Bruce doing the "response" to Bond's "call" (in a most soulful way I might add) while the band plays a fairly low key groove around the whole thing, nothing flashy (highly unusual for them I might add).  Behind Bond's faint organ you hear snatches of Mellotron, not the symphonic beast of pop sike proportions like "Strawberry Fields Forever" or "We Love You", but it's there and Bond was there first. Strangely the track is devoid of any sax, just bass, drums and keyboards. "My Heart's In Little Pieces" is an organ blues belter in the best Artwoods style tradition.  Bond wails like Bobby "Blue" Bland or Jimmy Witherspoon and cooks the B-3 like Jimmy Smith.

Sadly there's been no legal "proper" GBO singles CD which is more than a crime.  For years there was talk about the multitude of unreleased 60's G.B.O. tracks being released with the singles as a box set by Robert Stigwood (who if I am correct owns the G.B.O's Columbia era material) but nothing ever came of it.  Fortunately I just discovered both of these tracks are available as bonus cuts on the CD reissue of "There's A Bond Between Us", which you should go out and snag (along with the CD reissue of their 1st LP "Sound of '65" with bonus cuts).

I think there is a company that still makes custom Mellotrons, a perspex one would be pretty awesome so you could see all the tapes!

Oooh, that would be cool, I knew I liked you, good ideas!!

The Conquerors version is even harder to find than the GBO's!