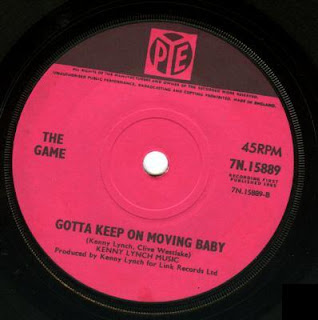 We have here kids the debut 45 by a group of youngsters called the Game who've gone down in the freakbeat hall of fame thanks to the high dollar value singles they've released.  This single is by no means easy to come by but certainly was (and probably still is) their most accessible. Though it bears little resemblance to their more in demand next three singles it is still quite catchy.

Back in the 80's I was well into The Game after hearing their brilliant songs here and there on various compilation albums and each time another track when turn up somewhere it would be a banner day.  I had to wait until the late 90's until their was actually an entire Game LP "It's Shocking What They Call Us" (and later CD) but by this time I had tracked down all of their single releases via a slew of comps of varying degrees of legitimacy or dodgy-ness.

"I Gotta Keep On Moving Baby" is more snotty nosed r&b and "hard" beat than "freakbeat".  To my ears it's akin to early Wimple Winch or maybe The Primitives.  It's best bit is the gritty guitar solo worthy of any 1965 Pretty things record with it's bluesy tone and maracas shaking in the background.  "But I Do" is a somber beat ballad, luckily its upbeat enough to stay interesting.

"I Gotta Keep On Moving Baby" appeared on Bam Caruso's "Rubble 10:"Professor Jordan's Magic Sound Show" and "But I Do" turned up on Sequel's "Doin The Mod 3:Maximum R&B" CD. Both tracks were collected on the long out of print Game LP/CD "It's Shocking What They Call Us".

For a look at their next single see:

Email ThisBlogThis!Share to TwitterShare to FacebookShare to Pinterest
Labels: The Game freakbeat mod

Gosh they do look young don't they!?!

Gosh they do look young don't they!?!