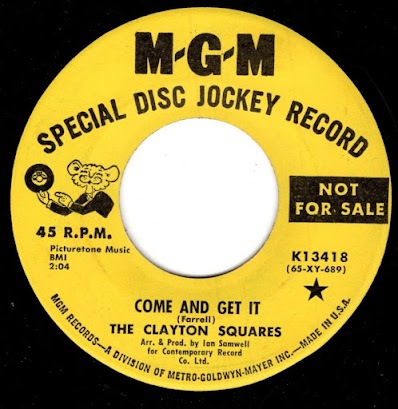 The Clayton Squares were an obscure 6 piece Liverpool mod-ish r&b band who cut just two amazing 45's in their short career from '65-'66.  They were also reputedly once almost the home of one Ian McLagan, who given a choice between them and The Small Faces by robber baron Don Arden chose the latter!  This is yet another "Anorak Thing" American oddity here as this band were virtually unknown in their home country and yet someone thought it prudent to release it here (the record was their U.K. debut as Decca F 12250 in October 1965)! 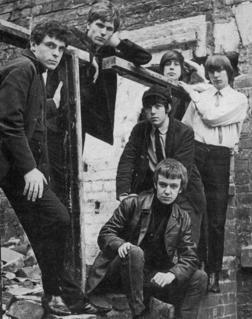 "Come And Get It" is a brilliant uptempo groover propelled by some quirky horns and those weird percussion (is that a cowbell I hear?) and a very soulful vocalist.  The whole thing epitomizes that U.K. 60's '65-'66 soulful r&b I'm always on about in the blog (like The Gass, The St., Louis Union, The Quik, The Eyes of Blue, etc).  Rocking uptempo shit kids, check it out below and decide!  It takes me back to the mid 90's when I was trying to pull this girl (unsuccessfully) but I did succeed in turning her onto this monster tune via one of the many mix tapes I'd share with folks! I'm going to own up and tell you I can't recall what the flip was like which tells me it wasn't very good, to make up for that I'll post links to both sides of their next and last 45 "There She Is"/"Imagination" (U.K. Decca F 12456, July 1966). As criminal as it may sound NONE of their tracks have been properly (ie "legally") reissued and sadly ignored by Decca/Deram when they did their "Freakbeat/R&B/Beat/Mod Scene" CD compilations!

Hear "There She Is":

Email ThisBlogThis!Share to TwitterShare to FacebookShare to Pinterest
Labels: The Clayton Squares

It's hard to believe that there were so many decent groups out there in the wilderness. I'd never heard of them, so thanks for posting.

The Clayton Squares had one other release, one side of a 1966 EP recorded live at the Cavern Club, they do steller versions of Watch Your Step, Hey Good Looking and Tell Me How Do You Feel The other side of the disc is Black Night and Mama, Keep Your Big Mouth Shut by the Hideaways, cut at the Sink Club. The EP w/sleeve is on the Europaring label and was never released except as an insert in the German photo book Beat In Liverpool. I picked up a copy years ago in Amsterdam for 10 gilders, the last one I saw for sale was in a photography book shop in Paris last March, didn't look at the price.

My dad was one of the founding members of the Clayton Squares. He often tells us stories about their time during the 60's the infighting about not.just being the next merseymoptop group. It seems they were just a couple.of.years ahead of their time. Seen in some circles as the first mod band and one i'm particulary proud of - the scruffiest band in liverpool.
They were the house band at the famous Cavern club from 63 - 65 takng over where the Beatles had left.
I'm proud to say they were cutting edge and for just a small part of the 60's the lived the dream.
thanks for posting. Glen Meskell son of Arthur Meskell bassist in the Clayton Squares